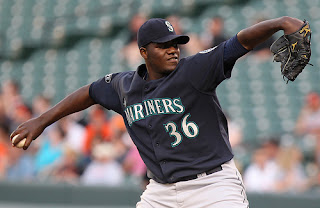 Seattle Mariners - Michael PinedaPhoto: Keith Allison
There are a lot of things to talk about in tonight's game. We'll start with Dustin Ackley who in his first at bat got a hit through the legs of Roy Oswalt into centerfield. After an 0 - 2 count he managed to stay alive and get a solid hit. In every one of his at bats he seemed to connect with two strikes and really wait on the ball. He actually looks a lot like Ichiro when at the plate. I would like to see some side by side video of them both.

Speaking of Ichiro, he really set the table tonight, going 3 for 4 and scoring 3 times on the night. Since having a day off he has had a multi-hit game everyday since. Today's 3 hits brings him to 6 consecutive multi-hit games.

Pineda shut down the Phillies through 5 and 2/3 innings without giving up a hit, only allowing a walk and a hit batter. Well, it was called a hit batter. Chase Utley's jersey was hit by the ball as he was hovering over the plate and didn't even make an attempt to get out of the way. I was more than irritated that the umpire allowed him to take first. Pineda ran into trouble in the 6th with 2 outs after walking Rollins and giving up a single to Victorino, Chase Utley came through with an RBI single. Ryan Howard was walked to load the bases and the bullpen started to get busy. Placido Polanco ended up getting K'd by Pineda to end the threat and therefore finish Pineda's night.

For the M's, their offense started in the 2nd off Oswalt as Justin Smoak and Dustin Ackley both singled in the inning, but it was the third that gave them the games first run. With one out, Ichiro singled to bring up Brendan Ryan. Ryan hit a line drive over the head of Utley and all the way to the fence to score Ichiro from first and land himself a triple. M's 1, Phils 0.

Miguel Olivo led off the 4th inning with a homerun over the Phillies bullpen, his 11th on the year. M's 2, Phillies 0.

In the fifth inning the M's taught the Phillies how to play small ball as Ichiro singled, Ryan walked and Adam Kennedy dropped a sac bunt to put runners at 2nd and 3rd. Justin Smoak flew out to foul territory and Utley, having his back to the play couldn't get the ball in on time to get Ichiro hustling in from 3rd. M's 3, Phillies 0.

Ichiro's third hit of the night came in the bottom of the seventh as he doubled to left field. Brendan Ryan followed with a liner over the shortstops head to score Ichiro and the score was 4 - 1 in the M's favor. Brendan Ryan was 2 for 3 on the night with 2 RBI.

Shane Victorino hit a homerun off of Aaron Laffey in the 8th, leaving a pitch up and center that the flyin' Hawaiian put up and out over the scoreboard in leftfield. M's 4, Phils 2. That proved to be enough as the Mariners sent out their stopper in the ninth, Brandon League. League did his job after it got a tiny bit interesting, finished by a stellar play by Brendan Ryan. M's take game 1 of the series and remain just a half game out in the AL West as every team in the West won today.

On a side note, Chone Figgins had his worst game yet and looked totally lifeless by the end of the game. Just as I was hoping he was coming out of his slump he gives us a game like today's. Two botched plays in huge situations that would have been made 99 out of 100 times by any Major League player but were not considered errors. An 0 for 4 night with a pop-out to the catcher in foul territory, another to the third baseman, also in foul territory and the worst swing I have ever seen on strike three ever. I have a feeling we will see Kennedy at third tomorrow. We'll see.

We looked better than we have looked in a long time today. A lot of encouraging things from the lineup and from our newest member, Dustin Ackley. Tomorrow the King is on the mound against the Phillie's, Vance Worley. Let's hope Felix can reclaim his throne after his last outing.