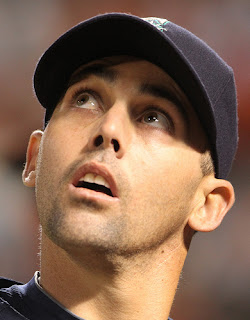 Jack Wilson looking for help from abovePhoto: Keith Allison
Let's just start out by saying there is no need for a game recap. In a game that finished with a 1 - 0 score that the Nationals won on a sac fly in the bottom of the ninth, there just isn't a lot to talk about concerning this one.

Pineda was dominant through 7 innings however, getting into trouble just once with the bases loaded and only one out. He battled back and got the final two batters on strikeouts to end the fourth inning. Pineda threw 7shutout innings but was matched by Nationals starter, Jason Marquis. The M's had no hits through the first five innings and it was Pineda who broke up the no hitter on a single to center field. That's just how bad the offense has been for the Mariners as Pineda has to get things going himself. It was Pineda's first hit in the Major Leagues.

In the series we saw three outstanding performances by starting pitchers. In all three games they allowed just one earned run through 21 innings and yet cannot find a win. Not for the starters, not for the team as the Mariners are swept by the Nationals. It's a tough thing to watch after such a great series versus the Phillies where we took 2 out of 3.

Things continue to get worse for the M's and the excitement after this series is starting to wear. Yeas, the M's have one of the best pitching staffs in the Major Leagues, but it isn't getting the job done. If we cannot hit the ball we will not win games and we sure as heck won't win the AL West. The only think that we have not seen this season is any sort of consistency. If the Mariners and Wedge cannot put a consistent lineup on the field every night, our offensive woes will only continue. To date I cannot recall a single series where we have used the same lineup 3 days in a row. I could be wrong, but that's how much we have switched things around. Not just hitters moving up and down the lineup but players in and out of the lineup all together. This has got to come to an end. Wedge in an interview yesterday said that it was the hardest thing to do to find the right spots for everybody to be, but I don't think the way to figure that out is to give them a one or two day trial run. Consistency! That's what we need.

The Mariners drop to a game under .500 for the first time since May 26th. Just when you think they are putting the pieces together and really making a run at first place we go into a series like this and totally fall apart. The series opener was a terrific outburst for our offense and it all went for nothing as the bullpen fell apart in the 9th to erase a 5 - 1 lead with 2 outs. Since that time the M's hitters have scored just 1 run. Maybe that blow by Wilson Ramos in game 1 will take a few days recovery. If that's the case, this team isn't a team I'm prepared to take into the playoffs.

Our next series is at home versus the Marlins. In a series that will provide the M's fans with a chance to see pitchers hit for the first time as the Florida Marlins are the home team. Due to a scheduling conflict at their home field, the band U2 is taking precedence over the Fish and sending them to Safeco. As the Marlins have struggled as of late they have found themselves with a new manager and a new game plan. At this point, it's hard to say what we will see from either team. I do know that we should see a strong starting pitching effort from Felix tomorrow, the sad part is, we can expect that from the Marlins as well.

I'm a bit bummed out over the game today if you can't tell. This entire series is just too pitiful. Hopefully the M's get back on track and start to score some runs tomorrow. Two and a half games out now as the Rangers didn't play today. We have to get this turned around!