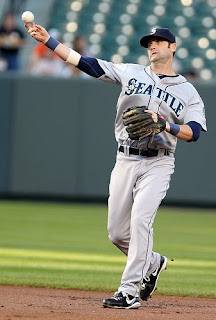 Seattle Mariners - Adam KennedyPhoto: Keith Allison
In pre-game warm-ups Eric Wedge had Adam Kennedy taking some ground balls at 3rd base today. Is this a sign of things to come? I stated a while ago that this would be the best case scenario for the M's to keep Kennedy in the lineup when Ackley finally gets promoted. It is understood that when Ackley arrives that he needs to be in the lineup everyday, or as much as possible.

What does this mean for Chone Figgins? Well, it means less playing time. Most likely not right away, but I'm sure that if we don't see a huge change in Figgins between now and Ackley's arrival, Figgins will be sitting about as much as Jack Wilson. Although I believed this to be the best case scenario for the M's, I didn't think that Wedge would be this deliberate. Having Kennedy take grounders at 3rd in front of Figgins is a pretty clear message and almost a slap in the face to Figgins. Although everybody knows in all of baseball how poorly Figgins has been playing, it can't be easy to watch someone warming up in your spot that doesn't normally play there.

As far as Ackley playing everyday or close to it. We all know that is the way it is supposed to work, but in the arrival of Peguero, Halman, Mike Wilson or the recent call-up Mike Carp, this hasn't been the case. Carp has been the most consistent but still saw a night off the day after his arrival.

We all love seeing these young kids play and I believe that they all have a lot to offer, I just wonder how much we are missing by not being consistent with them. I guess we'll just wait and see, but for now it looks like one person may be sitting more consistently soon. Good luck Figgy!