Mariners Implode In The Ninth 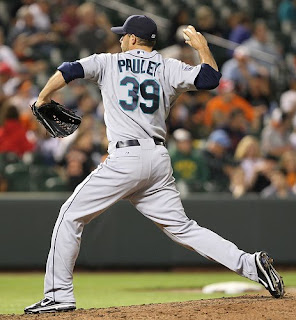 Seattle Mariners - David PauleyPhoto: Keith Allison
On a night when everything went right for the Mariners it all went down in a ball of fire named Wilson Ramos. After the Mariners took a 5 - 1 lead into the ninth inning they handed the ball to Brandon League, an interesting decision that will be talked about for the next couple of days. Fister had given up just three hits all game and had only thrown 99 pitches. Why he didn't come out for the ninth inning is anybody's guess. My guess, Brandon League hasn't pitched in a few days.

Jayson Werth started the inning getting on base by a Justin Smoak error that landed Werth at second base. League followed with a walk and it got a bit interesting. All of a sudden, League got Zimmerman to ground into a double play and there were two outs with Werth on third. Should have been a done deal. But, that wouldn't be the case. The next hitter, Hairston hit an RBI single to score Werth and make the score 5 - 2. Mike Morse followed with a line drive off of the leg of Brandon League which proved to be Leagues last pitch as he was pulled for an injury. Hmmmm... interesting.

On the scene, David Pauley. Pauley gave up an RBI single to Danny Espinosa to make the score 5 - 3 Mariners and put the winning run at the plate in Wilson Ramos. On a 1 - 1 changeup, Ramos smashed the Pauley pitch over the left field wall for a dramatic walk off win for the Nationals and a huge gut wrenching blow to the Seattle Mariners.

The M's chased Livan Hernandez early, scoring 5 runs in the first 5 innings and getting 13 hits on the night. It was one of the best offensive games we have seen in a while with a lot of timely hitting and aggressive baseball. Ichiro and Brendan Ryan both had two hits, Kennedy and Gutierrez had three hits a piece and Dustin Ackley had a hit and a couple of RBI. Doug Fister added to his own cause by hitting an RBI single in the top of the 4th scoring Guti.

It was just one of those games. We can blame Pauley as he took the loss. We can blame League for not coming in and closing the door, we can even blame Wedge for taking out Fister in a game that was totally his to win and in no way needed to come out. But really, who would have imagined this? Not in a million years would I have anticipated giving up 5 runs to a team that barely hit the ball through 8 innings. I don't think we need to do any head hunting on this one. Just say WOW, and move on.

I'm still a bit shell shocked as prior to the homerun I was pre-writing my victory blog in my head and thinking of a great title. I was seeing that the Rangers were losing to the Houston Astros and thinking how we could be tied for first place after the game. Now, I'm a bit devastated after such an awesome weekend versus the Phillies, the wave that I was riding seemed to have collapsed. Now as I write I see the Rangers and Astros tied in the ninth inning and I don't want to look anymore. Even if Texas loses I will be upset, realizing that would have been first place for us. If they win, well, that's worse.

We've been here before this year, and coming back from tough losses like this has been something we have done well with. This team is remarkable and will continue to find their ways to win. We as fans feel pretty down in moments like these, but I can't imagine how Pauley or League feel right now. Honestly, Fister deserves so much more than what he's been given this year. Now that he finally got to pitch in a game where there was run support, the bullpen caves and he still can't get a win. That is a whole lot of tough luck. Hopefully that changes soon. Hopefully the Mariners pick right up tomorrow as if this didn't happen. We still own this series! LET'S GO MARINERS!!!!