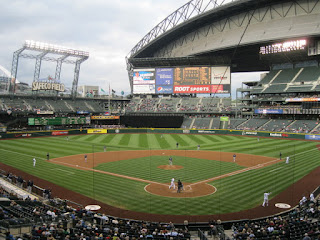 Yet another game where our first hit didn't come until the fifth inning. Sure it was a homerun by rookie Carlos Peguero on a line, just over the right field fence, but still, our first hit in the fifth inning? Why is that acceptable? Two days ago our first hit was in the sixth and it was by Pineda, OUR PITCHER! Yesterday we had just one hit through six innings and that too was by a pitcher, Felix Hernandez. What in the H - E double hockey sticks is wrong with our offense?

I said it about a week ago that Ichiro reverted back to his old swing again and his hits have gone down again. When he was out of his slump he was getting the bat out in front a lot more and driving the ball. Now, he is sitting back and slapping at the ball again. He is trying to bunt a lot more as well which isn't working. I wish I had all the video of his swings so everybody could see the difference, but it is there.

Vargas had a rough start giving up three runs in the first inning and settled down from there, just allowing one run in the sixth. The Mariner offense couldn't muster much besides a sacrifice fly from our buddy Chone Figgins in the 7th after three consecutive singles by Ackley, Guti and Peguero. It's an RBI, I guess you can say that's good, but when you are down by 3 and you have the bases loaded with one out, GET A HIT ALREADY. The outfielders were playing way in and Figgins didn't even put a full swing on the ball. Frustrating!!! Seamen 2 - Fish 4.

The lineup wasn't that bad today besides the absence of Justin Smoak. Other than that, the only other problem was that Figgins was in the game at third. So, maybe that's a big problem. The bigger problem on the day is that we didn't take advantage of a Texas beatdown and The Angels did. That brings Anaheim Angels of California, Los Angeles, Disney, back in front of us as we stoop down to third place in the AL West standings. It seems like other teams are starting to put two and two together to get four and we seem to be coming up with just three.

Tomorrow we have an opportunity to win another series still. Hopefully we won't give the game away to a team that came into this series as the most troubled team in baseball. But, if history repeats itself, we seem to lose against the bad teams and win against the great teams. Maybe that's our problem, we're just in need of some deeper competition. Maybe.

SodoJoe
Written By: Joe Henrickson at 3:07 AM