Pineda Loses Control In The Seventh 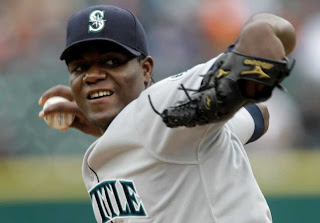 Seattle Mariners - Michael PinedaPhoto: Keith Allison
Pineda started well pitching 3 and 2/3 innings giving up his first hit to none other than Brian McCann. McCann has been brutal against the Mariners in the first two games.

The Mariners got the offense started early tonight with Ichiro hitting the first pitch out for a homerun in the first. In the second inning after a Miguel Olivo double, Jack Cust hit him home with a double of his own. Miguel Olivo would end up leaving the game with cramps.

In the fourth inning Jack Cust hit a solo homerun to extend the Mariners lead to 3 - 1. That lead would hold until the 6th when the Braves had a small two out rally capped by a Justin Smoak error to bring them within 1 run. In the seventh, the wheels came off for Pineda. After walking the bases loaded and getting only one out Wedge came to the mound and released him of his duties. The ball was handed to Aaron Laffey who came in and gave up to singles and allowed all three of Pineda's base runners to score. David Pauley came in and got the last out of the inning. Braves 5 - Mariners 3.

The bottom of the 7th inning the Mariners had an opportunity to get back into the game. Ichiro led off the inning with a single and after a Brendan Ryan flyout, Adam Kennedy singled and Justin Smoak came to the plate. For some odd reason there was a double steal. Ichiro safe at third, Kennedy, out at second. I don't know just yet if Mariners manager Eric Wedge called for the double steal on the 3 - 0 count, but we were really not in a position to be getting our tying run out when he was already on base. Serious managerial error. Two pitches later, Smoak walked anyway which would have loaded the bases with one out. Not the case however. Dustin Ackley singled on a line drive to center to score Ichiro and put the M's within one run. Yes, that would have tied the game if Kennedy were still on base.

Not to beat a dead horse, considering that was the final score, Braves 5 - Mariners 4, but after Ackley got on base with his RBI single, Chris Gimenez came to the plate. Gimenez was bunting. Yes, bunting with two outs and the tying run at second. I don't know about any strategy that calls for a catcher to try and bunt with guys at first and second with two outs and your team is down by a run. After his botched attempt at bunting and getting behind in the count, Gimenez ended up watching a fastball left right over the heart of the plate for strike three. Seriously? If there was ever a perfect pitch, that was it.

Today made me question a lot about our manager Eric Wedge. The seventh inning some of the worst baseball decisions that I have ever seen were made. Starting with not getting someone up and throwing in the pen after Pineda's first walk of the inning. Waiting to bring Laffey in until the bases were loaded was a mistake. Obviously easier to say knowing what happened. If Pineda ended up striking out the side I wouldn't be saying this. The fact is, in the seventh inning your starter goes out and gives up a leadoff walk, you get someone up in the pen. After his second walk he would have been replaced but Laffey wasn't ready.

The bottom half of the inning was what did me in though. I don't often yell at the TV, okay, I actually do, but this situation with Wedge's decisions was embarrassing. The Mariners lose another game while actually scoring more than a run and Texas, Anaheim and Oakland all won. That puts us at 3 games out of first and three games out of last. Tonights loss, I give the big "L" to Eric Wedge.