Support For The King - A Welcomed Gift! 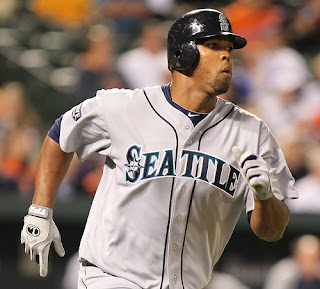 Carlos Peguero Photo: Keith Allison
Tonight I watched the Mariners on ROOT SPORTS!! We got through the first inning and I thought, "Here we go again", as the M's went down 1,2,3 and we headed to the second. Felix dominated the second inning and finished the Rays off quickly. The second inning was something unlike anything we have seen in a Mariner game in a long, long time. In fact, there were many things we hadn't seen at all!

Leading off the inning, Jack Cust hammered a Price pitch for a homerun to give us the lead 1 - 0. Gutierrez reached on an error and was followed by Adam Kennedy who hit a single. Up to bat came Chone Figgins with runners at first and second. Figgy shot a base hit through the hole between second and first to score Guti. Another thing we had not seen in a while. Figgins hitting!

Following Figgins was Carlos Peguero. This kid swings the bat so hard! Peguero put the game way out of reach with one swing as he belted a James Shields pitch over the fence for a 5 - 0 Mariner lead. 5 runs in one inning? Two homers in one inning? What happened? This coming just a day after my last blog post that said we needed a power bat in our lineup. Maybe someone IS reading this thing.

Bottom of the fourth Peguero comes up again. He swings really hard again and once again sends a ball into the seats. Two homeruns for Peguero on the night and 4 RBI in a game. He could be on his way to intimidating. After two outs were made, Justin Smaok came to the plate and did some damage of his own by sending a line drive into the right field seats. Smoak really hammered it! The M's sailed home from there with the 8 runs and Felix took care of business.

Felix Hernandez struck out 11 batters in 7 innings of work. He came out of the game at just 97 pitches giving up only one run on 5 hits. Another Cy worthy performance going up against an AL elite in James Shields. Shields however was lit up, giving up all 8 runs on 7 hits and letting 4 shots leave the yard. Shields started the day with an ERA a full point below Hernandez but Felix showed exactly why he is called the KING!

So, after this tremendous display of offense tonight, I'm sure that people have even more hope in what this team is capable of, now we just need to put up these crooked numbers consistently. I posted the lineup when it came out on Twitter and I thought it was the best lineup that we have had this year. As far as the results, I may be right, and I'm sure we will be seeing this lineup again. What a night to start off against the Rays. Let's do it again tomorrow! GO MARINERS!!!