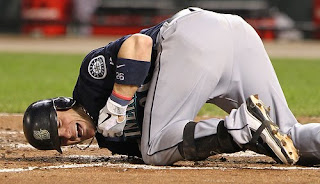 Brendan Ryan - Seattle MarinersPhoto: Keith Allison
Brendan Ryan continued his aggressive baseball today as many other veterans spent some time riding the bench. Today was a day for the rookies. Well, most of them anyway. In a lineup that was void of Justin Smoak, Jack Cust, Chone Figgins and Carlos Peguero, it was kind of anybody's guess on how this new lineup would fare versus Justin Verlander and the Tigers.

It started out interesting as Brendan Ryan stretched a single into a double in the first as nobody was covering second base for the Tigers, but Verlander managed to get Kennedy to pop out and Olivo to strike out to get out of the inning. After that, that was pretty much it for the M's. Halman singled in the 5th, stole second, advanced on a flyball out and scored on a wild pitch to put the Mariners up 1 - 0. The bottom of the inning the wheels fell off as Fister got hit hard. The Tigers scored 4 runs in the inning and that was pretty much the game. Fister continued to sail after the fifth and completed the game but to no avail as the M's never got to Verlander.

Good news! Texas lost again too. So we didn't gain any ground today but we didn't lose any ground either. So still two and a half games out of first and all alone in second. It's a good place to be at this point in the season, but hopefully we figure out this offense before too long. I can only imagine that the Rangers are going to get crazy hot really soon.

You never like to have to sit your superstars, but Ichiro was once again 0 for 4 tonight and we watch his average dip to .252. That isn't just a slump, he's completely off. In my opinion, he needs a couple of days to regroup. I would love to give Halman the opportunity to lead off and play right field. Let's have Ichiro just sit back and watch a game. It seemed to work for League, Smoak seemed to do well given some time off, why not Ichiro? I think the 200 hit season may be out of reach by now anyway.