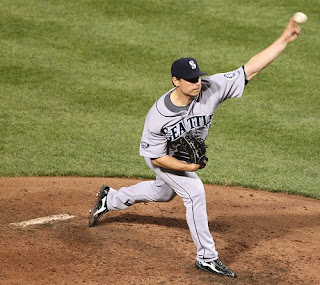 Jason Vargas Photo: Keith Allison
Jason Vargas was back on track tonight as he shutout the Tampa Bay Rays on only 4 hits. Two of those hits came in the ninth inning. After his last 2 outings where he found himself struggling, tonight was a total turn of events.

The offense tonight continued it's onslaught of hitting as Justin Smoak gave the Mariners an early lead with a homerun in the bottom of the first on a line drive to right field. It was Smoak's third homerun in 4 days. Smoak had an interesting day today, spending some time with the ESPN crew doing a cover shoot for a magazine, I think he showed off a bit today, AND I LIKE IT!

In the 3rd the Mariners scored again after Peguero was hit by a pitch, Ichiro walked and Brendan Ryan was safe on a sac bunt when they tried to get Peguero at third. The bases were loaded for Smoak who got another RBI on a bases loaded walk. Cust followed and I was seriously hoping that he would get a walk to break a record for his 6th bases loaded walk, but instead he hit it hard to first to move everyone up a base and get an RBI. M's up 3 - 0. The Rays intentionally walked Adam Kennedy to load the bases again and face Olivo. Olivo hit a shot down the third baseline that almost eluded Longoria who made an incredible play on the ball but was unable to get an out. RBI and a hit for Olivo. M's 4, Ray's 0.

Kennedy came up in the 5th inning with Jack Cust on first and hit a line drive two run homer to right field to put the M's up 6 - 0. Olivo made it back to back homers as he skied a ball to left field just over the Ray's bullpen. M's 7, Ray's 0. What a night for our offense who has now outscored the Rays 15 - 2 in the past two days. Where did this team come from? For a team with the worst offensive numbers in the league, we seem to have turned over a new leaf.

What a season, what a display of power again today, what a fun team to watch.
All 7 runs today came on just 4 hits, can you say timely hitting??? This lineup still is the best, it also really shows where the weak spots are. We'll get to that later. In the meantime, LET'S GO MARINERS!!!!!