All Star Break Comes At A Good Time 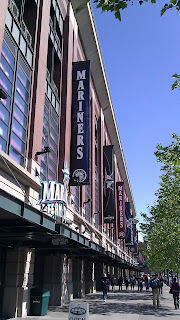 Seattle Mariners - Safeco Field
Well, here we are! The All-Star break. A much needed three days of rest for a team that has pressed and pried and scratched for every run that has crossed the plate this year. Yes, we are the winner of the lowest run production in the Major Leagues with 301 runs scored. The league average? 381 runs. Texas Rangers? 457 runs, second in the Majors and Anaheim? 355 runs scored. Both Anaheim and Texas have been tearing it up as of late, adding to their offensive totals in extreme fashion, where the Mariners, well.... they have not.

The pitchers, who are the main and probably the only reason that our team has been in the race at all has seemed a bit overworked. Every pitcher, every start, lots of innings so far this year. Until the recent absence of Erik Bedard, every pitcher has been going strong all year. They have still been putting up good numbers and getting it done on the mound, but when you play everyday in one run situations and do everything you can to get a win, and don't, I would guess that would make for some tired pitchers. Tired physically and mentally. With the exception of Pineda and League who have the opportunity to pitch in the All-Star game, everyone else will be able to spend some time away with their families and get a chance to regroup.

Our starting nine, or eleven in our batting order really needs to take this opportunity. Earlier in the season Justin Smoak had a small break and came back with a fire until he was moved in the batting order, let's hope this break will inspire the same type of results. Ichiro, with his day off earlier in the season made a tremendous impact as he came back and hit multi-hit game after multi-hit game. Let's hope the rest of the lineup will follow the lead of Ichiro and come back with a vengeance.

I could certainly use the break. Especially after this current 5 game slide. It's hard to be a fan in Seattle at times. Everyday watching these one run games and watching our bullpen fall apart or us struggle to get a guy in from third with no outs, it makes for a lot of emotion. Through it all though, I have not cried. This season has been inspiring, exciting and emotional. With the young guys working their way in and trying to find their way, with veterans struggling to the point of not having a career at the Major League level anymore, and the bullpen coming in night after night and not knowing how they are going to do, it makes for a long, long season.

So we can take this break as it is. A time to rest, watch the All-Star game and have fun. No worries about trades, competing, losing or winning, just rest and remember that at the start of this season we anticipated close to another 100 losses. I can rest in the fact that we are just 5 games under .500 ball at this point.