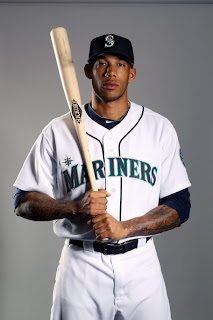 Seattle Mariners - Greg Halman
Today was another day where Doug Fister came out and pitched a masterpiece. He allowed just one run on one of the most controversial plays where there was no controversy. What? Well, Cameron Maybin was the only run to score in the fifth inning after reaching base via a walk. The count... 3 balls and 2 strikes. Maybin waltzed down to first base on a full count and not one person said a word. Not the umpire, not the coaches, nor Fister. He would later score on a single that shot off Brendan Ryan into left field.

Truthfully, you'll hear a lot about this so called walk in the next 24 hours, but the reality is, the Mariners lost because of their inability to hit the ball once again. The M's managed to just get two hits in the entire game, both off the bat of Greg Halman. They had an opportunity to tie the game with Brendan Ryan on third and only one out, but Justin Smoak struck out and Halman followed with a pop fly. Once again, a run 90 feet away and only one out and we simply fail.

Doug Fister pitched a complete game, giving up just 6 hits and the one walk. If I were Fister at this moment in my career, I would start demanding some help or demanding to be traded. It has been absolutely ridiculous when Fister gets on the mound as the Mariners have given him no support all season long.

I said it before and it sounds like I need to be a broken record now. Halman needs to be our everyday left fielder. He is by far the best defender that we have within our left field trio and to date has shown the most ability to hit a baseball. My irritation is keeping me from feeding you the stats at the moment, but the kid has done everything right since being called up.

Another lineup by Eric Wedge tonight. No Kennedy, Wilson at second, Figgins at third. Sounds like another game that Wedge was just trying to be nice to some veterans rather than win a ballgame. I understand that Ackley is out and Olivo is out, so why would you take out Kennedy? I find that to be a bit off. Then again, Wedge is the king of new lineups.

Last but not least, Smoak stinks. I know everyone is really high on Smoak and they laugh at Texas because they gave him to us for a rental player in Cliff Lee, but the way I see it, we got a kid that is hitting a mere .242 and is currently getting worse. He made an error that cost the game the other night and then tonight he simply could not connect on a ball to get Ryan home from third. All I can think about Texas is the fact that they were in the World Series last year. I hope this gets better for us soon.

We didn't lose any ground on Texas tonight but the Angels gained ground on them. That means we are deeper in the hole in third place. Really though, I wonder how many people are still hoping to win the division?

Until tomorrow.... Blake Beavan should be making his MLB debut. Good luck Beavan, hope you can pitch a shutout.