Mariners Take Another Day Off 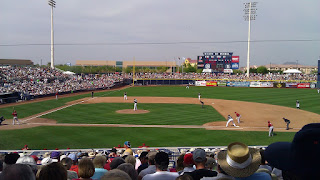 Seattle Mariners - Spring Training Facility
Well, as most teams got back to work today after the All-Star break, the Mariners offense continued their rest through the first 5 innings going hitless against Derek Holland and the Texas Rangers. They finished off the day getting shutout on just 5 hits and losing the game 5 - 0.

The M's are on a current 6 game losing streak while the Rangers are on a 8 game winning streak and now lead the Mariners by 8.5 games in the AL West. So long Mariners! The Texas Rangers pitching staff has been pulling it together, at least enough to get the wins as Hamilton, Cruz and Young are giving the pitchers quite a bit of room to work with. The Ranger fans have a lot to be excited for in the second half as they are looking at winning the division and adding some pitching depth in the coming month. Last year, it was Cliff Lee, this year, they could shop from our pitching shelf again. Who knows?

My rant for the night... Chone Figgins was in the lineup for the first game starting this second half. Not happy about that, to me, any time he is in the lineup it says to me that Wedge isn't trying to win. That may be stretching it a bit, but seriously, he's done! He did get one of the 5 hits on the night though, maybe it's part of his "second half, oh now it's time to hit" magic! Maybe not.

There are a few things that have to happen in the second half for this team. If the M's are really going to make a run at things next year and add some pieces to bolster this lineup, they need their foundation to really step up. By foundation, I mean guys like Gutierrez who is not going anywhere. He needs to hit above the Mendoza line. Justin Smoak is talked about as being a key to our future. If he continues to get a hit in every 25 at bats, he is only going to be a key to our demise. He really needs to get hot and establish himself in the lineup as projected. The glimpse we saw after his dad passed away was awesome, but that needs to come back and come back to stay. Ackley has been great thus far and has been somewhat of a catalyst for our offense. If he had guys on base around him I could only imagine that he would be a producer.

If these things don't happen, we have a few more years before we can look at competing for the AL West again. As it looks right now, those things aren't happening and we can only hope and pray that we right the ship before it sails too far away.

Now that we are past the break, we'll see if the hitting coach will keep his job much longer.
If our offense continues like this, I would seriously doubt it.