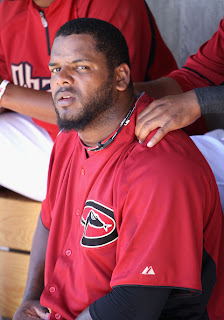 Wily Mo Pena
The Mariners have signed hard hitting DH, Wily Mo Pena to the Tacoma Rainiers. Pena has a ton of power, creates a lot of fear and is a free swinger. This all put together also means that he strikes out a lot as well.

In Tacoma there is a bit of excitement, being that he hits AAA pitching like they are serving up batting practice, but will this in any way transfer to a MLB appearance for Big Mo? He was DFA'd by the Arizona Diamondbacks this past week. In 17 games he hit for a .196 AVG, 9 for 46. Five of those 9 hits were homeruns. In 63 games with AAA Reno he was hitting .363 with 21 homeruns and 63 RBI. So, in the grand scheme of things, he didn't get a lot of opportunity at the MLB level and the M's have to hope that his AAA numbers would translate to decent big league numbers once again in the American League.

As we all continue on wondering why we keep seeing Jack Cust in the lineup as he continues to watch pitch after pitch pass him by in an approach that has to be the least aggressive that I have ever seen, maybe Wily Mo Pena could mean the end of our Jack Cust saga. Pena, in 99 out of 100 chances will most likely not go down looking. I could get pretty excited about a free swinger that could actually reach the outfield seats. Cust has not been that guy for the M's.

So, maybe the idea is to put guys like Pena and Peguero together and see what type of moon shots could be lifted out of Cheney Stadium. Maybe soon we will see them both in the Mariner lineup again. It would most definitely add a bit of fear in a lineup that is pretty quiet on the offense side of things. Go get em' Big MO!!! Hope to see you soon!