The Off-season Wait! What Does It Hold? 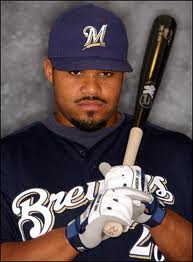 Free Agent - Prince Fielder
So far this winter, things have been pretty dull for the M's. Signing a few un-notables to the AAA roster has been it. Unless of course you want to talk about the huge signing of.... drum roll please.... Luis Rodriguez. Somebody stand up and cheer. L-Rod has been hanging around in a utility role the past few seasons for the M's and looks to do the same this year. Nothing really to write home about, hence the sarcasm, but truth be told, he has been in the right place in the right time for our team.

Listening to the radio the other day I heard Jack Z in an interview talking about "the team" and what they are looking for this off-season and to my surprise, Jack said that they were looking for a middle of the order type bat. Weird, right? Maybe a starting pitcher too, and, oh yeah, some relief help. After that interview I was at total ease. I felt as though there was a plan and that after these winter meetings, the M's were going to be a team to compete for the AL West title.

All kidding aside, when Matt Pitman asked Jack Z about the possibility of signing Prince Fielder, the question was not dismissed by Jack Z. It isn't proven to be out of the question for the M's to sign him, nor out of the budget. Jack did not want to comment on the budget of the team but seemed to point toward the idea that anything was possible. I always get the feeling that the cards have to fall just right to make any great deal happen with the M's. There is always a shot to get any great player - then, we seem to lose the deal to another team that has more money and a chance to win the World Series.

This scenario of free agents this year is a bit different. You have Fielder who has helped carry his Brewers from no status to playoff status and now is testing the waters of the FA Market. You have Albert Pujols who plays for the World Champion St. Louis Cardinals and is also now looking at other options in free agency. So, in my mind, they are looking for more than an opportunity to win. The other option, money. If they only want money and lengthy contracts, the M's don't seem to fit that bill.

There's other fish in the sea. Maybe we will finally take our chances on a guy like Vladamir Guerrero. I just hope we do something this year.