Angels and Rangers - The New Red Sox and Yankees 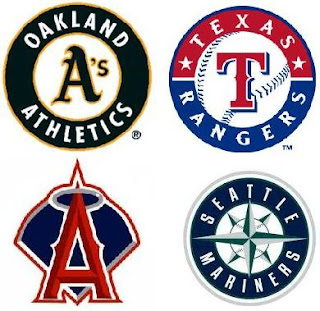 AL West Logos
This off-season there has been a major shift in the MLB rumors and free-agent signings. Every year the AL sits back and watches as New York and Boston snatch up every free-agent that they can by simply throwing money at them while the other teams wait around for the leftovers.

This year has been completely different. The first couple of signings were thought to go down in Miami, the new home of the Marlins, but instead Albert Pujols and CJ Wilson both decided on signing with Anaheim. Together receiving over $300 million dollars in contracts combined. We learned yesterday that the bidding for Japanese phenom Yu Darvish had ended and the rights were landed by the Texas Rangers. They now have 30 days to sign Darvish to a MLB contract.

The Rangers are not completely throwing money at players at the moment, but when it comes to the rumors, they are in on almost all of them.

As we slide down the list to the Oakland A's and Seattle Mariners, things get a lot quieter. The A's seem to be in a place to sell or trade their top assets in pitching in hopes to rebuild and the M's, well they are in on a lot of rumors, but something tells me that Jack Z is holding his chips to go all in on Prince Fielder.

We skipped out on Cuddyer and Willingham and haven't had any MLB signings since the Winter Meetings with the exception of George Sherrill. That being a $1 million dollar contract, plus incentives. So, I look at our rivals that are putting there dollars on the line to win ball games and fill stadiums and I can only assume that we have to follow suit or we'll be in a world of hurt. I don't want to be the Baltimore Orioles of the AL East. I want to build a team that will contend every season. I hear our GM say that, but it's time we put our money where our mouth is! SIGN PRINCE FIELDER!!!!

SodoJoe
Written By: Joe Henrickson at 2:07 AM