The End Is Near! 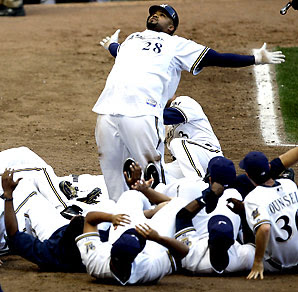 Prince Fielder - Free Agent
The end is near. No, not the whole 20-12 garbage that has been surfacing, you'll have to check out another blog for that, but, as Scott Boras stated, Prince Fielder WILL SIGN before years end.

That leaves us with just under 2 days for that to be a truthful statement. I don't believe a thing that comes out of Boras' mouth, but I can only assume that the rumors between now and the end of the year are going to get crazy and the inside talks that we will never see are probably already stressful and one GM is already throwing in the cards. Another, probably putting up a dollar sign that is stretching his team beyond where he wanted to go. Only time will tell, but time is getting shorter.

The longstanding rumored teams to land Prince are the Cubs, Rangers and the Mariners. The M's being a longshot, but very interested in the slugger. Every team has a limit and all of the teams have stated that the Boras ceiling is way too high. Recently we have heard that the Washington Nationals are in the mix as well as the Baltimore Orioles. Oh, and don't forget the Scott Boras special, THE MYSTERY TEAM! Always in the mix is an unknown team that supposedly is willing to spend and has high interest. The O's General Manager specifically stated that they were not going to be in the price range for Fielder and that he didn't want to be used as bait against other teams. Take that Boras. He put it out there in the open just to snub the Boras regime. I love it!

So, it is assumed now that the Rangers are out after winning the bid for Yu Darvish, and already having a lack of space for Michael Young. The O's are out and the Nationals have already stated that Adam Laroche will be their starting first baseman in 2012. So, their GM may be posturing and getting ready to swoop in as the Angels did in signing Albert Pujols, but we have to assume every team is "interested" in having Fielder for the right price. The Cubs, I'm sure they are still in the mix, but they have made about as much noise as the Mariners in the rumor mill as of late.

So, we'll be in waiting. Patiently? That's the last thing we are in Seattle is patient, but the end is near. We can only hope and pray that Fielder finds his way to Seattle and Seattle becomes home for him.