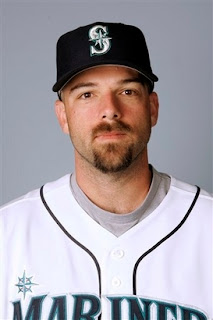 George Sherrill - Seattle Mariners
As you may already know, the Mariners shelled out just over a million dollars for a former player in George Sherrill. Sherrill was an excellent piece to our bullpen that left us in the now infamous trade that brought Eric Bedard to Seattle and sent Sherrill, Adam Jones, Chris Tillman and more to the Baltimore Orioles.

Sherrill also spent time with the Dodgers and Braves since leaving Seattle and most likely timing it just right as Erik Bedard's time in Seattle has run it's course as he landed in Pittsburgh this year.

Sherrill held a 3.00 ERA in 51 appearances with the Braves this past season with a 3 - 1 record. His splits versus righties and lefties come as a surprise. As a left handed pitcher, he held left handed hitters to a .256 BA where righties hit just .236, but on the flip side, lefties OBP was .275 where righties jumped all the way up to .358. Sherrill walked just one lefty and 11 righties. He struck out 32 lefties and just 6 righties. He also only gave up 3 HR's on the year, all of them at home in the ATL.

George Sherrill is brought in as insurance for the bullpen to compliment Brandon League and be a situational pitcher against lefties but I'm sure we will see him step into a bigger role as the season goes on. Sherrill is a beast on the mound and I'm excited for his return to Safeco Field. I'm sure he is excited to be back.

Can't wait for baseball to start in Seattle!