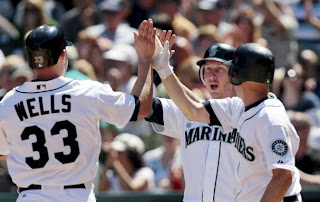 Youth Movement
We could get really excited here and assume that we are holding out for that one last piece named Prince Fielder, or we could assume that the 40 man roster as it exists today will not be the same 40 man roster that we leave Spring Training with. The latter is the more realistic. There are a number of guys on this current roster that I can see being designated for assignment by the end of Spring Training. That is, if we acquire any talent at all.

Today's rumors of the Mariners interest in Johnny Damon caused a little bit of - well, it didn't really cause anything at all really. Moving on, the Prince Fielder talk seems to be getting more aggressive and as it does, it appears that the Seattle faithful may be willing to move on from Prince now that it appears others are involved. Being that everything is still rumors, we still basically have no idea. Basically what it comes down to is the almighty dollar and nobody in Seattle wants to be in a situation that we would be crying about in three years. Prince Fielder is a great player, but it still has to make sense.

What if we don't sign Prince and we move into Spring Training with our current 40 man roster? I've posted it in my right hand column if you're interested. No Prince would mean that we have another year of record breaking poor offense, or does it mean that everybody continues to grow and we get a little better? I for one would assume that there are a couple of guys that would be a lot more consistent as far as playing time goes and therefor would do quite a bit better at the plate. Guys like Mike Carp, Casper Wells, Gutierrez and hopefully Justin Smoak. Smoak had a real roller coaster of a year last year and I can only hope that he gets more solidified this year and starts to tear the cover off the ball.

Kyle Seager seems to be a standout athlete and I don't think we have seen enough of him yet either. I hope we would get to see him on a more consistent basis this year. I would hope as well that we would be seeing him over Chone Figgins. Unless by some miracle that Figgy becomes the Figgins he was in Anaheim.

Ackley had a good year last year and it was only a partial season. I think we can expect to see a lot more from him this year as well. All of these guys were thrown into the fire last year and many of them did an okay job, but playing against a bunch of teams that were already established, that equals a lot of losses. I would presume that as this group becomes a team over the Spring and gels together a bit more that it will really help the offense to turn a corner. If just a couple of these guys start to shine we'll see a whole different set of numbers than we did last year.

I for one am excited about this coming year. I am excited to see a more definite roster than the one we saw last year. I think we could live without Prince Fielder. It would be nice to see this group we have grow a little bit more. I'm not saying I don't want Fielder, I'm simply saying that it won't be the end of the world if we don't get him. I'm already planning my trip to Spring Training and no matter who is there, I will love my team.

After all, we've been with them for 34 years, there won't be too many more before we win the World Series. Here's to growing a Championship team!!!!

Written By: Joe Henrickson at 2:48 AM