And Now We're Back To The Nationals Again... 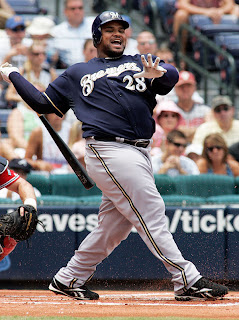 Prince Fielder - Almost A Mariner
I'm starting to feel like a ping pong ball. Not round and white, but like I'm being batted back and forth by the media, Scott Boras and the droves of Tweeters that make up this fast paced market these days. The Prince Fielder rumors have been so slow that I believe people just start making things up in an effort to talk about something and put it out there.

Today may be a slightly different story though. Actual owners are meeting in Scottsdale, Arizona for various reasons. One is to talk about extending a contract to Baseball Commissioner Bud Selig who is talking of retiring after this year. The others, who knows, probably a ton of financial mumbo jumbo. What did show up on the doorstep of these ownership meetings was a particular baseball agent named Scott Boras. Boras spent some time schmoozing the owners as per his usual, going over the heads of the GM right into the checkbook of the owners. Fun stuff right?

Well, it is believed to be the news of the day that Boras sat down with Ted and Mark Lerner, the Nationals principal owners and schmoozed them a bit more today. As reports were circulating around the industry that the Nats were 99% sure that they would not sign Fielder at his current price, Boras was busy working the Lerner brothers from every angle. Still tonight, rumors are from both ends of the spectrum in regards to the Nationals. Some say they are still at the 99% not going to sign and others say that the Nats are aggressively pursuing Fielder. Then again, who really knows?

So, somebody saw Boras meeting with Nats owners, they run to Boras and say, "What happened?, are the Nats in on Fielder?" Boras answers, "Oh yeah, they're definitely in!" Anything else Boras says would be shooting himself in the foot. So, speculation is really all we have to go off of no matter who we talk to because owners aren't going to come forth with their budget constraints and Boras isn't going to say how much he would settle for. In other words, we are in no different place than we have been all off-season. Fielder is still a free agent that has an agent that demands way too much for his clients and no team is in on his current price. As the price tag drops, if it does, more teams may jump on again and then the price will go back up again.

Oh yeah, and Buster Olney thinks it's a great idea if the Dodgers owner signs Prince and then sells the team. What? There's an idea, let's saddle a new owner with an enormous contract. There's thinking one through. Why would he want to do that?

With all that being said, we did get one more piece of info that should be a satisfying to know. Boras did comment that Prince Fielder would sign before springs first pitch. What a JERK!!!