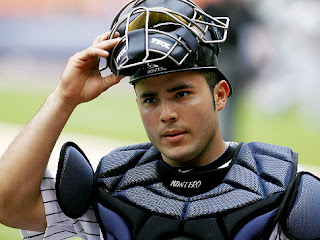 Jesus Montero - Seattle Mariners
Just minutes after I started work today someone approached me with the news that the Mariners traded Michael Pineda. My first thought, Oh No! Then I heard it was to the Yankees and it peaked my interest. Please say it's for Montero. Why yes, it is for Montero.... and some other guy.

Out of all the things that we could have done, I believe that this is one of the best moves that Jack Z has made since becoming our GM. We all love Pineda and we're all going to hate seeing him in pinstripes, but I think the reward here far outweighs the cost. Montero is a highly touted prospect, who in his September call up last year knocked the cover off the ball, hitting .328 with 20 hits in 61 AB's with 4 doubles and 4 HR's. Welcome to the Big Leagues kid! He's just 22 years old and the Mariners are projected to have him under team control for the next 6 years. I'm excited about this one.

Pineda is the man and had a ton of talent and we were all excited about what he was going to bring to the table next year for the M's. I thought he was better than Felix at the beginning of last year and as soon as there became a book on him, it showed. Pineda started to get roughed up a bit and the once two pitch pitcher started working on a third pitch. As the season lingered on you could see Pineda getting worn out, he was eventually shut down. I'm not going to say that I was ever doubting Pineda, but I will say that I was excited for him to work in another pitch or two. Waiting on the fastball is a lot easier to do when you only have two pitches to throw.

The total trade, still pending physicals, was a four player trade. Montero and Pineda being the forefront of the deal, it also included Jose Campos going to the Yankees for Hector Noesi. I don't know a ton about either of these guys, but last year Campos played for the Everett Aquasox, a class A affiliate of the Mariners. He seems to be a long way off from the MLB but the Yankees must have had interest for some reason. Hector Noesi debuted last year for the Yankees and held an ERA in the 4's with 56.1 innings pitched. At 24 years old, some say that this guy has more upside than Pineda did. Of course, I don't know who those people are, but it is what it is.

So, in my opinion, this trade is a tremendous deal for the Mariners as it gives us a substantial upgrade to our batting order. Montero is a catcher and is wanted more for his power bat than his catching ability, but really, has to be at least as good as Miguel Olivo behind the plate. There seems to be a wealth of competition behind the plate for the M's this Spring and it'll be interesting to see how it all plays out. Montero is projected to be a 3, 4, 5 hitter and will probably be used at DH as well. The only downside to Montero is that he is a right handed hitter. Let's hope Safeco isn't an issue for him as it has been to some.

I would love to get into projected lineups and such, but I will wait until after the physicals take place and all this has a chance to settle in. I am excited, I hope Seattle is excited too.

Still no news on Prince Fielder, I don't think this means we're out on Fielder, but it may. We'll have to continue to wait and see. Today Fielder was in Texas, not a good sign. I'll take Montero and our current roster and see where Jack Z continues to take us. Let's get Spring Training started. I'll be there in March/April and I'm stoked!

Written By: Joe Henrickson at 2:12 AM