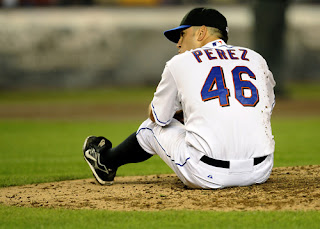 Oliver Perez - Rainiers?
Well, after watching Moneyball today and seeing Billy Beane trade guys like Carlos Pena away for statistical analysis, I wonder if Jack Z has subscribed to the Moneyball program. Maybe it was a latenight infomercial that he just couldn't say no to. Who knows, but Jack Z seems to grab a lot of guys that used to be, could be, simply just are not and who may never be. Most of these long shots have not worked out yet, but I think I may like the tactics.

Much like Pete Carroll, the Mariners create competition. Eric Wedge is on board and puts it out there every year that everybody has a chance to make the team. Whether that is true or not is still a question that I have.

Today, the Mariners signed Oliver Perez to a minor league contract and have given him an invitation to Spring Training. Looking at Perez's stats over the years, he looks like a losing pitcher. He has had a couple of good seasons and spent last year trying to make his year back to a MLB roster with the Mets. So, why? Why is Jack Z even wasting his time? My only guess is because Perez has great "stuff" and if we can do that one thing different we can land on a gold mine for really cheap. Moneyball has given me a new perspective on signings like this. My problem however is that this type of approach never, EVER, works out for the Mariners.

Case and point, Casey Kotchman! He never did a thing in Seattle offensively. Last year with Tampa Bay, he became the player that he was supposed to be when he was drafted. I do think that we would have better luck with pitchers than we would with hitters. Either way, it's just another low risk signing that we could only hope has a high reward. We'll just have to wait and see.

Written By: Joe Henrickson at 4:44 PM