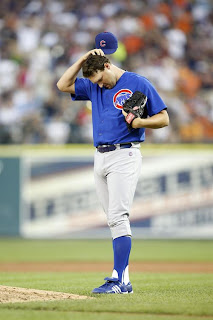 It was announced today that the Mariners signed relief pitcher Aaron Heilman to a minor league contract with an invitation to spring training. Not too much to write home about, in fact I wasn't even going to write at all but I want to give the guy his fair shake.

Heilman is a gut that the M's are familiar with to some degree. He wore a M's uniform before as he was with the team from December of 2008 to January 2009. So, actually he may have never wore more than just a jersey. He did appear at a Mariners Fanfest in 2009 however, then shipped off immediately after. We'll see if he comes to Fanfest ever again. Heilman was given to us in the three team trade that sent J.J. Putz, Jeremy Reed and Sean Green to the Mets and brought us players such as Endy Chavez, Jason Vargas, Mike Carp, Maikel Cleto and Ezequiel Carrera. We then turned around and sent Heilman to the Cubs for Ronny Cedeno and Garrett Olson.

Heilman is now back as a free agent wich makes any trade we may have made in the past all the more better as we gained some and then came back for nothing. I love it when that happens. Although it is still a question whether he makes the team out of Spring Training, I'm sure that he's a guy that can be a stopgap in the bullpen.

Competition! I think that Jack Z has taken a page out of the book of Pete Carroll and invites as many people as he can to Spring Training so that there is more competition for roster spots. I love the concept and I'm sure it works, but it doesn't do a whole lot for those of us that are looking for higher caliber names on our roster.

SodoJoe
Written By: Joe Henrickson at 2:24 AM