Welcome To The Mariners Hisashi Iwakuma! 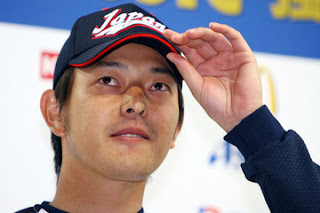 Hisashi Iwakuma - Seattle Mariners
I want to say that today is the day that the deal got done between the Mariners and Hisashi Iwakuma, but the reality is, it was yesterday. Considering I have to work for a living and I can't just blog all day, I'm writing this at 2am. The whole world already knows the news so I will try to do more than just reiterate.

The 30 year old right hander was a free agent in the Japanese Pacific League where he played last for the Rakuten Golden Eagles. He's put up very impressive numbers throughout his ten year career but does have issues with shoulder injuries. The Mariners have signed him to an incentive laden contract for just one year and a $1.5 million guarantee.

Sounds much like our departed Erik Bedard, we just didn't have to give up the farm to sign this guy like we did Bedard. We actually didn't have to give up anything. Last year Iwakuma tried to come to the MLB when the Oakland A's won the bidding rights for him but failed to sign him. Now that he is a free agent in Japan the M's were able to sign him without bidding and actually signed him for less than what the A's were offering him a year ago.

Iwakuma is looking for a team that he can have a good relationship with and he seems to have found that with the M's. Iwakuma stated that he was excited to find out that the Mariners wanted to sign him. He is invited to Spring Training and will be competing for a starting pitcher role. Currently he is projected by most to slide in behind Jason Vargas in the number 4 spot.

I'm not terribly excited about this contract as we still anticipate the Prince Fielder deal, but for the price and the amount of years I am truly amazed. In my post a couple days ago I stated that I didn't want to give this guy anything over two years and I was concerned about injury and longevity in this league. Seems to me that somebody in that front office knows what they're doing. Makes me believe that the Prince will be here soon.

SodoJoe
Written By: Joe Henrickson at 2:04 AM