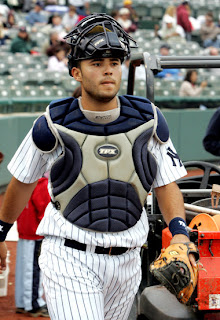 Jesus Montero - Seattle Mariners
With the latest deal that sent Michael Pineda to the New York Yankees, the Mariners are bringing in two players that would most likely be added to the 40 man roster immediately. Jesus Montero and Hector Noesi were both playing in the MLB by the end of last year.

With the current roster at 39 players, dropping Pineda and adding Noesi and Montero would bring that total to 40. Usually this means if there are any other additions after this deal is complete then someone currently on that 40 man roster would have to be DFA'd. We all assume that there are more deals to be done. As the Mariners are still lurking in the shadows, we can only hope for more options on offense and that Jack Z is still circling the wagon on Prince Fielder.

If no other moves are made, we would still be short handed compared to the rest of our AL West rivals, but that may be the case if we signed all of the remaining free agents. A lot of people have been talking about how the Rangers and the Angels have ran away with the West and I'm already heading into Spring Training with an anticipation for the season and an anticipation for competing in our division. As we all know, just because you have a highly touted offense doesn't mean that you win. Case and point, the Boston RedSox went into last year adding the biggest names in free agency on offense and in pitching. After all of that, they started off the year terrible, had a strong season and then tanked at the end without advancing to the playoffs at all.

The Mariners have an opportunity just the same as any other team in the MLB. Our chances may be slim, but they are still there. The San Francisco Giants won a World Series with great pitching and that pitching wasn't expected to be that great. In fact, that is how we started off our season last year until we fell off the face of the earth in July. I'm not trying to make a case for the M's winning the World Series this year, I'm simply pointing out that we still have 162 eventful games to watch this year in which every single one of them we have an opportunity to win.

Get out there and root for your team this year, no matter who is in the lineup. We have more of a chance to win when our fans our out there with them. 12th man needs to be out there for the M's too.

Written By: Joe Henrickson at 7:05 PM