Who Is Hisashi Iwakuma??? 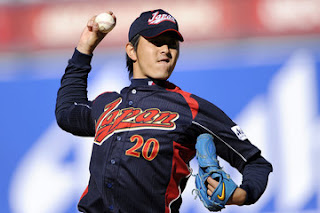 Hisashi Iwakuma
Hisashi Iwakuma is a pitcher in the Japan Pacific League. He plays for the Tohoku Rakuten Golden Eagles as a starting pitcher and a pretty good one too!

Although his W/L totals have gone down, we know that doesn't mean a lot about a pitcher as we watch Felix every year get robbed of wins and he's one of the best in the league. Iwakuma has actually gotten better each year when it comes to ERA. His 21 - 4 year was still his best at 1.87, but since went up to a 3.25 and then down to 2.82 in 2010 and last year was only at 2.42. However, he pitched only 119 innings last year versus the 201 he pitched in 2010. Big difference. Seems to be one of the many injury riddled options in Jack Z's black book. Hopefully he can remain healthy here in Seattle.

With a WHIP of just 1.050 last year and a 4.74 SO/BB ratio, I like what I see. My only fear is that it seems to follow the same scenario of all the other Japanese pitchers that come into the league. They start off being lights out and then year by year players start to figure them out and begin hitting the tar out of them. Maybe this is different, by the stats it doesn't seem that the Japanese players have figured him out, so maybe the MLB won't either.

So, he is 30 years old and looking at expanding his career in the US and like many Japanese players, he's attracted to Seattle. Thanks Ichiro! I guess it's not a gamble to sign him, but my thought would be for NO MORE THAN TWO YEARS! That may be hard for him to commit to, but I have my reasons. One is because of the life expectancy of Japanese pitchers in the game, the other is because of the amount of young talent that is in our program in regards to starting pitchers. I want to sign the guy simply out of curiosity, but not at the expense of pushing back our talent when they are chomping at the bit to be in the BIGS.

No more Brandon Morrow situations please! It sounds like Iwakuma has already tried on his new uniform, but as rumors are rumors we'll jave to wait for the official word. Tell me your thoughts on Hisashi Iwakuma!