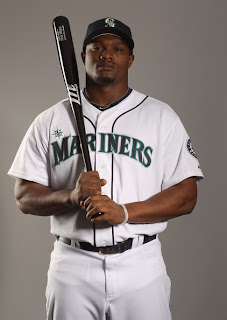 It could be the end of an era for two of our Seattle Mariners. Chris Gimenez and Mike Wilson were both designated for assignment today to make room for a couple of additions to the roster. Shawn Camp and Hong-Chih Kuo were both signed to non-guaranteed one year Major League contracts. Unlike many others this off-season that have signed minor league contracts with invitations to Spring Training, Camp and Kuo will almost definitely be on the Major League roster coming out of Spring Training.

Gimenez and Wilson both have had very little MLB experience. Gimenez more than Wilson over parts of three seasons with the Indians and Mariners, but Wilson has had an entire career in the minor leagues before making his MLB debut last season. In a very short stint Wilson went 4 for 27 in 8 games before being sent back down to AAA Tacoma. Wilson was a guy that I was really rooting for. A likable kid that finally got his chance.... or did he? Eight games? Is that enough to call it a chance? Last season the Mariners had a carousel of players in and out of the lineup and many found themselves in uncomfortable situations and never got the opportunity to hit a stride. Wilson, in my opinion is one of those guys.

Maybe the Mariners never saw him making the team. Maybe they threw him a bone in a year that was deemed to be a rebuilding year and a time to figure out what they had. Either way, Wilson is a big guy with a good bat and in my opinion, he deserved more. Now that Gimenez and Wilson are both waiting out their perspective 10 days to find out if they are released or traded or optioned back to the AAA roster, we can only assume that it tells us where the Mariners rank these young guys on their plans for next year.

As far as Camp and Kuo, I have no idea who they are, honestly, I don't care. Maybe they will do a great job with the team and maybe they wont, either way, I have a hard time with giving two guys a shot that aren't getting them anywhere else when there are others waiting in the wings. It makes me remember guys like Milton Bradley and Jack Cust. The other point is... it's the 40 man roster that they were cut from anyway, not the 25 man that is the team after Spring Training. Let's get this Spring started.