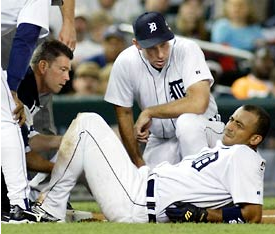 Carlos Guillen - Signed AAA Deal
Well, there you have it. The Mariners have officially signed Carlos Guillen to a minor league deal worth 1 million dollars. The M's, who have the youngest infield in all of baseball with rookies Justin Smoak, Dustin Ackley, Kyle Seager and Kawasaki have added what could be some veteran presence to the infield to go along with Brendan Ryan and the unlikely Chone Figgins. Figgins if he can pull his head out will compete for the third base job while Brendan Ryan is the assumed shortstop unless Kawasaki truly beats him out. Ryan is by far the best shortstop but the concern is his bat. Where does that leave someone like Guillen? Since 2007 Guillen has played hardly any shortstop and has been in utility role if he's been on the field at all.

The Mariners traded Guillen at the 2004 trade deadline for Ramon Santiago (whom they released a year later and Detroit re-signed) and Juan Gonzalez (not that one, never made it to the bigs and is in AA ball still to this day.) The trade was horrible and I was irritated when it happened, but I believe at the time that the Mariners were not happy with his injuries and were not confident that he would remain on the field. They were right, but still lost their tails in this trade. Guillen went on to bat .297 since joining the Tigers and made the All-Star team in his first year. He has been a fairly amazing hitter and he hits from both sides of the plate. Injuries? There have been many. In 2004 he played 136 games, 2005 only 87, 2006 and 2007 were his best years and since he has been on a steady decline. 113 games in 2008, 81 games in 2009, 68 games in 2010 and a mere 28 games in 2011. Needless to say, the Tigers didn't give him a new contract.

Perfect time for the Mariners to re-sign him right? Seems like the Mariners M.O. for a lot of signings doesn't it. Simply stated, the Mariners are looking at it from a Moneyball perspective. "IF" Guillen can stay healthy and can be a part of the lineup on a consistent basis, he brings an on base percentage of .355 to the table. Mariners need more base runners and need to score more runs. Guillen is another wild card, another gamble on health and one that could have a high reward if he can remain healthy.

That brings us back to the question, where will Carlos Guillen play? My best guess, anywhere he can. Over the past several years he has played at 3rd, 2nd, 1st and in the outfield. My only problem, and it's a big one, we already have a carousel of players that are in line for positions and in my opinion that I've stated for a while now, the Mariners need to have more consistency in their lineup. Everybody needs a good back up, that is understood, but you can only have so many. I hate that I already know some of the guys that I want to make the team will most likely not be here on opening day. Somebody has to go and only a couple months of Spring until we know who.

Good luck to Carlos Guillen and welcome back to where it all started. Maybe I will see you at the end of March, early April if you're still with the big league camp.