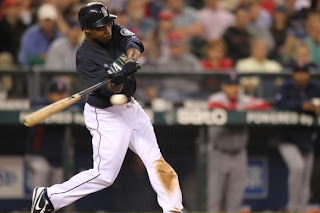 Figgins hit a solo HR today!
Today's game started super early for us West Coast folks. For those on the East Coast it wasn't so bad, a 12:00pm game is quite nice on a Sunday afternoon.

The game started off in the M's favor as lead off hitter Chone Figgins helped himself to his second lead off homerun of the season. The Mariners were in the lead and Jason Vargas had a one run advantage to work with. After Figgins, Dustin Ackley hit a double and the following three batters all flied out. Runner at second, no out, no small ball even thought about. Then again, it was our 3, 4, and 5 guys that failed to produce.

In a game where you have 14 guys in scoring position, you have to score some runs. Our only other run came in the ninth inning off of a Miguel Olivo homerun and we lost the game 7 - 2. The Jays produced. They had the same number of hits (8) as us but 5 more runs. That's a big difference in the boxscore. Here is a breakdown of our 0 for 14.

I don't know how this happens, but we seem to have a lot of games like this. We're getting great hits in the gap all game long. Hitting the doubles, advancing runners into scoring position, but never, ever, after they are in scoring position can we hit the ball. I don't want to read to much into it or go off on a wild tirade about it though, cause honestly we are doing pretty good at just a game under .500. It's far better than what I though we would be at this point. In the same regard, 0 for 14 with runners in scoring position just shouldn't be happening. Not even to a bad baseball team. It has to make people wonder what in the world is going on mentally with this club. Whatever it is, if they can get this little piece of the puzzle figured out, we would be competing with the Rangers right now. Seriously! It's something to think about. If we were even halfway better with runners in scoring position, we would be winning most of our games.

That's baseball for you though. I'm sure the same conversations are taking place all over the league with teams like the Angels and Red Sox that should be performing way above where they are, but we're actually still playing better than projected and asking those questions. I'll take that. As we figure things out, it will only get better, and I cannot wait for that day!!!

Don't give up Mariner fans! That day is coming!