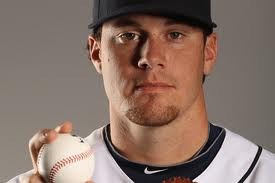 Seattle Mariners - Blake Beavan
Blake Beavan is a product of the Texas Rangers. Blake Beavan is from Texas. Blake Beavan became a Mariner just over a year ago and today was the first time that Beavan would face his old team in Arlington. Although he had faced Texas twice last year at Safeco and virtually shut them down, Beavan was not the talk that everyone was talking about today. The hype was surrounded by Neftali Feliz who was making his MLB debut as a starter. Feliz had held down the role of Closer in the past two seasons and the Mariners hadn't any success against him. In fact, in 48 opportunities against Feliz, the Mariners did not get a single hit.

Today, as Beavan and Feliz got into their perspective zones, there was more news surrounding the Seattle Mariners camp than it's starting pitcher. Brendan Ryan became much of the talk on sports radio as he was benched for Tuesday's game. Ryan made a bad throw to Justin Smoak at first trying to turn a double play in yesterday's game that eventually cost the team two runs as Texas capitalized on the extra out. The play was not an error because an out was recorded at second base, but Wedge stated in a pre-game interview that those types of plays have to be made and that players have to be better than that. Ryan got to watch the game from the bench and Munenori Kawasaki got the start at shortstop.

A pitchers duel it was as there was a total of only 11 hits in the game. Texas had 7 of them, the Mariners, just 4. The only run came in the bottom of the second inning on a David Murphy grounder to shortstop that went off the glove of a diving Kawasaki. Michael Young scored from third base. Young reached third on a wild pitch just moments before the ground ball by Murphy. A lot of what if's to be had, but that's the way the ball bounces.

I'm really excited about the performance put up by Beavan. Not many people will be talking about a 6 hit performance by Beavan when I've already heard the national news mention Feliz and his scoreless 7 innings. Beavan deserves a lot of credit even if he didn't land the win. He faced the most prolific offense in the Major Leagues and held them to one run on 6 hits. Tom Wilhelmsen as well, he finished off the game going 1.2 innings of work while allowing just one hit. I'll take it!

I won't take only getting 4 hits from out offense though. Yes, we finally got our hits off of Neftali Feliz which will help when we have to face him again, but the problem is that only two players got those hits. Justin Smoak and Jesus Montero both got two hits and the rest of our lineup didn't do a thing. This is a problem, not just because we lost the game, but it seems that every time a pitcher in the Seattle Mariner organization has a great game, our offense takes the day off. I'll give it to Feliz, he's a great pitcher and hopefully that's all it is, but there were countless times last season that the M's made opposing pitchers look like Cy Young Award winners when their ERA's versus other teams were above 5.00. I don't want to repeat that this year.

From our first few games, I don't expect that will be the case. We've been hitting the ball well and scoring runs when we needed to. On the other hand, we haven't scored in 16 consecutive innings now and I don't want to make any excuses. Neither does Eric Wedge for that matter. If we have many more 4 hit games like today, the Mariners will have to look at extending their benches at Safeco.

Texas has now kicked us out of first place and tomorrow we throw another former Ranger at them in Kevin Millwood. Millwood's experience should bode well against the Rangers, but as we have seen already this series, there is no room for error. If Millwood can get the "W" tomorrow, the Mariners will have a great shot at splitting the series and heading back to Safeco with a winning record. That's what we all want to see. Until then...

Written By: Joe Henrickson at 2:23 AM