Felix Dominates, But League Gets Dominated In M's Loss 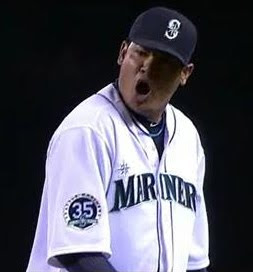 Felix Hernandez was on the hill for the Seattle Mariners, and usually that means the Mariners would put up a very poor offensive showing. Tonight, was no different. Through 8 innings Felix put up zeroes on the scoreboard for Cleveland and only gave up 5 hits and one walk while striking out 12. Amazing right? Well, it's the first time we saw Felix with such dominance this year and it looked as though the Mariners would wind up with a win.

Offensively, the Mariners struck first in the 5th inning. Michael Saunders started off the inning with a double and Miguel Olivo sacrificed him to third. With one out, John Jaso hit the ball to second base and on the throw home that may have got Saunders, the ball ended up soaring over Carlos Santana's head and all the way to the backstop. Saunders scored and the M's had a 1 - 0 lead.

That lead lasted until the ninth inning when Brandon League came on. It must not have been his night as he struggled from the get go. He allowed a lead off walk to Carlos Santana, a single to Travis Hafner and another walk to Shelly Duncan after a Casey Kotchman sacrifice. Then, former Mariner Jack Hannahan came to the plate and singled to left field scoring 2 runs and sealing a victory as the Mariners couldn't get anything done in the bottom of the 9th.

Really? The same old crap in an all new season. Felix Hernandez pitches his heart out and we score just one run on 5 hits. We continue to give the ace of our staff nothing at all in the form of run support. Who was pitching tonight for Cleveland? Oh yeah, never heard of him. But I'm sure that he's in the running for an All-Star appearance now after facing the M's. If we keep this up for our ace, we're going to be a team that no pitchers or sluggers want to sign with. Tonight was an EPIC FAIL! Brandon League, is scary almost every time out and tonight was not his night, but I think I am going to have to give this loss to our offense and League to share.

After the 8th inning when Felix fanned Shin-Soo Choo to end the bases loaded threat, Felix was pumped. I mean overly ecstatic to get out of that inning with a shutout intact. How do you pass that type of momentum over to your closer and have him fail so miserably? I can't understand it, I don't like it and I hope I don't have to see a game like this again.

The M's move on to face the WhiteSox tomorrow at Safeco Field. I can only imagine that the stands won't be too full, but maybe Friday will help. Hopefully we have better luck in a series with them than we did with the Tribe. Hector Noesi, Blake Beavan and Kevin Millwood are coming up next. Our chances? I would say they are pretty good that we take 2 of 3 against the Chi-Sox. Until then M's fans, until tomorrow!