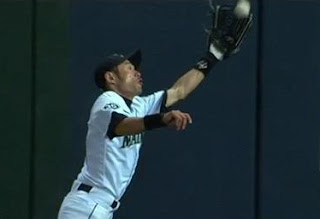 Ichiro - Seattle Mariners
The only exciting thing that happened!
I'm really embarrassed right now! Coming home to our home park in our home opener and getting spanked by the Oakland A's and the regenerated arm of Bartolo Colon after beating up on him just 5 days ago is disgusting. I simply hate the fact that we could only get 3 hits in a game that should have been a catalyst for a great season. Especially with a team that is built for hitting in this very park.

Felix Hernandez didn't pitch as good as he used to.
The M's hit like they did through most of last year.
Our bullpen didn't do anything to help.
A's 4 - M's 0.

Our three hits came off the bats of Ichiro Suzuki, Dustin Ackley and Jesus Montero.
That's it!

I'm really trying to figure out what the problem is here. Is it simply that Safeco Field is not a hitters park? I can't assume that is the answer, as clubs come in here all the time and hit homeruns, beat us and make us look bad. The game of baseball is a mental game and I think the thought in and of itself of Safeco Field being a pitchers park would tend to wear on players after a while. Then again, this is just the first game. Is there a curse on Safeco Field as with the Chicago Cubs or the old curse of the Bambino and the Red Sox? Maybe.

When Safeco Field was built it was called the house that Junior built. Ken Griffey Jr. made baseball in Seattle what it is today. The problem was, they built the park so big that even Griffey himself didn't want to play here. Homerun production would go down and he couldn't have that. The complaints started coming almost instantly. Then, as the season wore on, it became a reality, Seattle would chase it's star out of town looking for greener pastures and shorter fences. It was the worst moment in Mariner history and may be a moment that continues to haunt our franchise.

We do not have the opportunity to sign any big named free agents. Our hopes for getting any kind of power are to trade great pitching for a rental player or trade for a prospect like we did in Jesus Montero. I'm sure that Montero wasn't thrilled about coming over to the M's. In spring they had him constantly trying to work on hitting the ball to the opposite field in hopes that he'll get out to the shorter porch in right. That just seems like the most backwards way of doing things and I would bet that most big league players have read the writing on the wall when it comes to Seattle.

It sucks! It absolutely sucks to sit and watch your team struggle so bad in their home park and see little guys like Jemile Weeks hit one out of the yard for the opposing team. I can't understand it, I try, but I just don't have any answers. In fact, neither does anyone else in the organization. The only thing that I can ever offer as a suggestion is that the Mariners make the decision and move in the fences. They talk about it every year but they don't do it because our team is based around pitching and defense, but what about this year? We traded away most all of our good pitching. We have a number of question marks on our pitching staff at the moment and our entire infield and outfield are rookies. Defense will only get better in a smaller field.

I'm really just spouting these frustrations because I know that every fan hated watching the outcome of today's game. I know it is just one game, but in three of the nine we have played we have scored 1 run or less. That is unacceptable. Especially when we keep throwing guys out there that are costing us runs. Brendan Ryan was benched earlier in the week for not turning an easy double play. Miguel Olivo sat out a game for what seemed to be a day off but may have been disciplinary reasons. Tomorrow I really hope we don't see him after yet another passed ball tonight that cost us another run. The guy just doesn't know how to block the ball. I would much rather see Montero, John Jaso or Adam Moore back there than Olivo anymore.

So, it's one game. I feel better now that I've vented. Let's hope for better results tomorrow and pray that the next time Felix pitches that he gets a little more support than just 3 hits. Our lack of offense when Felix takes the hill is bad and almost cost him a Cy Young Award. Tomorrow we look forward to Hector Noesi and we get to see if he looks any better than he did in his last start. We'll find out soon enough.

Well Mariners, we can only go up from here. I hope!

Written By: Joe Henrickson at 2:00 AM