Lucas Luetge - A Diamond In The Rough 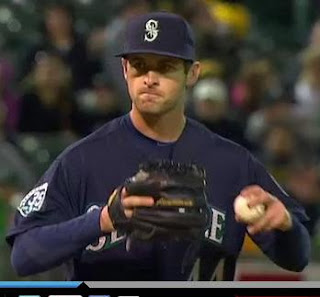 Lucas Lester Luetge, a left hander out of Brenham, Texas. At 25 years of age, Luetge has been fighting his way to the big leagues and has now made it in the most unlikeliest of ways.

Luetge was drafted in 2005 by the Chicago White Sox in the 31st round of the amateur draft. After not signing in '05 he was drafted again in 2006 by the White Sox in the 18th round. Once again, he did not sign and ended up getting drafted by the Milwaukee Brewers in 2008 in the 21st round and that is where he signed.

In the off-season, Luetge was selected by the Mariners in the Rule 5 draft. That is a process that is supposed to keep teams from hoarding players in their minor league system if another team can use them on their MLB 40 man roster. Players are eligible for selection in the Rule 5 draft who are not on their major league organization's 40-man roster and:
– were signed at age 19 or older and have been in the organization for four years; or
– were signed at age 18 or younger and have been in the organization for five years. There is a catch. Luetge has to remain on our 25 man roster for the entire season. If at any time the team wants to send him to AAA they can't. Instead they would be waving their Rule 5 rights and would then have to give Luetge back to the Milwaukee Brewers. Once Luetge has played a complete season, the M's can do whatever they like after that. The M's could trade Luetge if they wanted, but the team receiving him would have to adhere to the same stipulations until he completes a season in the MLB.

Now that we understand the Rule 5 draft, we understand that Luetge is here for the long haul. Right now, that seems to be a great thing. He hasn't received a lot of time out there on the mound just yet, but from what we've seen it has been pretty good.

His first appearance came against the A's on April 7th when the M's were up 8 - 4 with one out. Luetge came in for Felix Hernandez and faced Josh Reddick. After just three pitches, Reddick had struck out and Luetge was done. Wedge replaced Luetge with Steve Delabar to face Yoenis Cespedes. Cespedes hit a 3 run HR.

Luetge's next appearance came on April 11th after Delabar had already came in and gave up back to back homers to Ian Kinsler and Elvis Andrus. This time Luetge replaced Delabar and took the mound to face none other than Josh Hamilton. Luetge worked Hamilton to a full count and then threw him a nasty slider to K Hamilton swinging. He came out to pitch the 8th inning, Mariners were down 3 - 1 at this point and he went to work. He got Adrian Beltre to fly out, gave up a single to Michael Young (who doesn't) and then proceeded to strike out Nelson Cruz before finishing off the inning getting Craig Gentry to fly out. Mariners went on to win the game 4 - 3.

Lucas Luetge has been pretty exciting to watch so far and his future looks bright. A young kid from Texas who had his entire family in the stands to watch his first win with the exception of his wife. Luetge had sent her home earlier in the day to get prepared for her trip to Seattle for the home opener. He didn't want her driving in the dark. It's always a question mark with a reliever, they can't plan for the family to be there at the right time like a starter can. Luetge said he was going to get an ear full from her when they talked on the phone. Pretty funny stuff.

Lucas Luetge has a Twitter account: @LucasLuetge where he proudly states that he is the World's Greatest Guitar Hero player and that he can jump and play at the same time. His picture even proves it. He also shows how modest he is as he wrote that he also plays baseball on the side for the Seattle Mariners. Sounds like a guy that I would love to hear more from. So, welcome to the SHOW Lucas Lester Luetge! Keep up the good work and have fun here, you'll love Seattle and the fans here.

SodoJoe
Written By: Joe Henrickson at 2:31 AM