Mariners Come Back And Beat Texas In The Ninth! 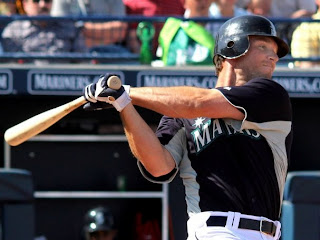 Oh what a game! The question marks were all through the air tonight as Seattle extended their scoreless innings streak to 23 and their pitching remained pleasant enough to keep them in the game. Kevin Millwood took the hill for the Mariners tonight to try and stop the 2 game skid in this 4 game series. Millwood struggled in the first after getting two outs. Josh Hamilton hit a double, Adrian Beltre walked and then Michael Young followed with an RBI single scoring Hamilton. The Rangers were on the board and things didn't look promising right from the get go. Millwood continued his struggles by walking Nelson Cruz but got out of the inning by striking out David Murphy.

Millwood settled down after the first inning and went into cruise control through 6 innings. He left the game after 6 complete allowing just the one run on 4 hits while striking out 7. I was skeptical about Millwood's outing today and wasn't looking forward to the outcome, but I must say, he surprised me and I hope he continues to do so.

Steve Delabar on the other hand, didn't surprise me. In fact, he irritated me more than anything. After getting two outs in the seventh inning, Delabar gave up back to back homeruns to Ian Kinsler and Elvis Andrus. If you remember, it was Delebar who gave up the 3 run shot to Cespedes of the A's as well. Not to cut him off at the knees, but really, I think it may be time to get some work in the AAA atmosphere for a bit. Now, instead of being down 1 - 0 the M's were down 3 - 0.

The stars of the day had to be John Jaso and Michael Saunders. Jaso led off the 8th inning with a triple down the right field line and scored on a Dustin Ackley single. That brought the M's within two. In case you needed that math help. It also brought an end to the 23 scoreless innings. In the ninth, the Rangers brought in Joe Nathan for the close and the Mariners went to work. Justin Smoak led off with a single, he was followed by Kyle Seager who hit a double and put runners at second and third. Munenori Kawasaki pinch ran for Seager. Jesus Montero hit a sac fly to deep right center field that scored Smoak and put Kawasaki on third. Then it was Saunders. Saunders hit a ball into center field scoring Kawasaki and Saunders never hesitated as he rounded the bag and ended up stretching his single into a double. The game was tied and the M's had their lead run on in scoring position as Brendan Ryan came up to the plate. With two strikes, Michael Saunders stole third to put the winning run just 90 feet away. On the next pitch, Ryan struck out and that left the ball in John Jaso's court. Jaso lined a single into center field scoring Saunders easily and gave the Mariners a 1 run lead 4 - 3.

Brandon League came on in the ninth inning and did a much better job closing a game than Joe Nathan did. With one out, League gave up a single to Mitch Moreland who ended up advancing to second on a wild pitch. Just because League likes to make things interesting. He went on to strike out Ian Kinsler and got Elvis Andrus to line out to Justin Smoak at first to end the game. The second game that Joe Nathan has blown a save for Texas as Texas now falls to 4 - 2 and still leads the AL West. The Mariners now sit at 4 - 3 and are in second. The series concludes tomorrow as Jason Vargas takes the hill against Derek Holland. That will be a great game to watch.

All in all, a great performance by the M's although they got a really late start. Millwood did great, Jaso in his debut as a Mariner had a phenomenal game and Saunders continues to prove his new swing is working. A very important win for this team and a huge hope for a Texas beat down as they face each other again tomorrow before heading home for their Safeco Field opener. Great win M's, see you all tomorrow.

SodoJoe
Written By: Joe Henrickson at 12:09 AM