Mariners History Being Sold On E-Bay 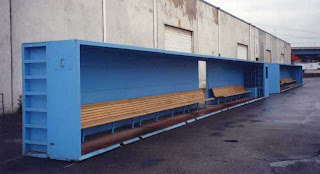 I've heard it said before that you can buy anything on E-Bay, but now I believe it. Mariners history has been put up for auction and will be sold to the highest bidder. That's right, as the picture shows, the Mariners dugouts from the Kingdome are being sold.

The dugouts are totally intact like they were taken out of the Kingdome in one piece. I assumed that these things were long gone and in a million little pieces by now. When I saw the picture, my first thought was, "Where would I put this?" Then my second, "I can't afford this!" I'm assuming that most people that are Mariners fans will probably share those same thoughts. We could all imagine owning something like this chunk of history, and what a conversation piece it would be.
These are the same benches that Mariner greats Ken Griffey Jr, Edgar Martinez and Jay Buhner all shared. The same place they all put their batting helmets, bats and gloves. It is the same flooring that they all spit their sunflower seeds on.

These dugouts together are the greatest monuments to the 1995 series that brought the Mariners their first AL Division Championship in an unforgettable series against the Yankees. You can only imagine how many people throughout time have sat on the visiting benches. Truly historic, truly amazing.

If you have the cash flow, make an offer! I would love to know what lucky fan is going to end up owning these artifacts. I just hope you have a big enough space for them. It's not enough to just own these things, you have to display them. If they end up in some yard somewhere covered by a tarp I would be really irritated. It would be great if they were somewhere we could all enjoy them. Maybe, a Mariners History Museum. Just a thought.