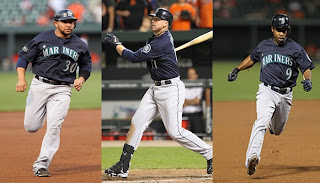 Smoak, Figgins and Olivo?
Not many of you will see this picture and have a rush of excitement run through your beings. In fact, most of you would see these three players and assume that this post would be about the next three guys to get cut or sent to AAA. Well, if that is the case a month from now, it isn't because of today's game.

Today, Justin Smoak, Miguel Olivo and Chone Figgins were the three producers in the game. It's almost comical, as these three guys were all talked about by Wedge today in pregame interviews as guys that needed to get things going and that they didn't have a lot of time to do so. Accountability? Has Wedge finally branched out to other players besides Brendan Ryan? Today he definitely did. He even went as far to say that Ackley could be getting more starts in the lead off role. What an exciting day for media, right?

In the first inning, after a single by Figgy and Dustin Ackley, Ichiro Suzuki grounded out and then Justin Smoak hit a 3 run bomb to deep right center that broke a huge 0 for 16 slump and put the Mariners up 3 - 0. In the 4th it was Miguel Olivo that took Rick Porcello deep, this time deep to left field and there was no doubt about it. It was now 4 - 0 Mariners.

The Tigers would cruise right back into the game with a run in the 5th and a 3 spot in the 6th capped by a 2 run homer off the bat of Miguel Cabrera, his third of the series and 6th of the season. Cabrera officially hit a homer off each of Seattle's starting pitchers. Wow! The Mariners put a stop to the bleeding in the 6th by bringing in Charlie Furbush as he slammed the door shut striking out Prince Fielder and Don Kelly and getting Delmon Young to ground out to first.

Top of the 7th inning, a two out rally for the Mariners put them back on top. Brendan Ryan drew a walk and Chone Figgins came up big with a wind aided double over the head of Brennan Boesch. Boesch was going back and it looked as though he was tracking it, but it kept going. With two outs, Brendan Ryan was going on the crack of the bat and scored easily from first base.

Our bullpen didn't allow a single run as Furbush finished off the 6th and a combo of Steve Delabar and Lucas Luetge did a tightrope walk through the 7th. The eighth and ninth innings were handled by Tom Wilhelmsen and Brandon League. League made things interesting as usual but managed to get it done without allowing a run. The win went to Charlie Furbush and the save to League and the Mariners sweep the Tigers in the 3 game series.

Already, this Mariners team has given us a world of emotions, excitement, anger and frustration. Coming off getting swept by the White Sox and heading into Detroit, things didn't look really good. Who knew that we could come in here and sweep the Tigers? I didn't, but I'm sure glad we're back to hitting the ball. What a series, what a day and what a sweep! Let's hope for Figgy, Smoak and Olivo that the hits keep on coming. Until next time Mariner fans.