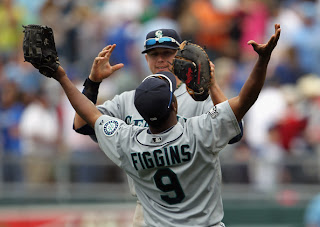 Smoak and Figgins - Praying for Answers!
Today's game started off really bad. Hector Noesi on the mound got through the first inning giving up 2 runs and left it to the offense to try and dig him out of the hole he created. It seemed as though the M's were going to get the runs right back as Chone Figgins led off with a single and Dustin Ackley followed with another as Figgy wheeled around to 3rd base. So, 1st and 3rd, nobody out and the Mariners got to work. Ichiro Suzuki struck out and Justin Smoak hit into a double play to end the inning. FAIL! Now, multiple games in a row the M's have been at 3rd base with less than 2 outs and cannot get a run home. Talk about frustrating.

Noesi got one out in the 2nd inning and didn't survive much longer after a bomb by Adam Dunn made the score 6 to nothing, Wedge had seen enough. Erasmo Ramirez came in and stopped the bleeding for the Mariners, but not the fans. He pitched 3.2 innings and gave up no runs on one hit while striking out 1.

In the Mariners second Alex Liddi walked with two outs and Casper Wells hit a double to leave runners at 2nd and 3rd. Brendan Ryan K'd to end that threat. FAIL! The third inning the M's brought home a run on a Dustin Ackley walk and an Ichiro double. Ackley scored all the way from 1st base. With just one out and Ichiro at second base, Smoak grounded out and Jesus Montero struck out. FAIL! In the 4th inning we had runners at 1st and 2nd with only one out after an Alex Liddi single and a Casper Wells walk, but, you guessed it, the M's couldn't score. Brendan Ryan popped out to Paul Konerko at 1st and Chone Figgins struck out. FAIL!

In the 6th inning Montero tried to make up for things by hitting a solo shot over the fence in center field to make the score 6 to 2, but that would be all the M's got that inning. The next three batters went down in order.

After Ramirez pitched his 3.2 innings, the M's brought in Hisashi Iwakuma. Remember that guy? If not, it's because he last pitched in Spring Training and he was officially the last Major League player to start the season on the opening day roster to not enter a game. It was Iwakuma's MLB debut. He pitched well, giving up just one run on an Adam Dunn homerun, his second of the day. Iwakuma went the final four innings and struck out 2 while walking one and giving up the homer. The Dunn HR was the only hit given up by Iwakuma. In fact, after Noesi was yanked in the first, Ramirez and Iwakuma combined to give up just two hits the rest of the game. That's 7.2 innings. Not too bad!

In the 7th inning, Brendan Ryan doubled to lead off the inning. Then Figgy struck out, then Ackley struck out and every one in Seattle said, "here we go again!" This time however, Ichiro hit a single to score Brendan Ryan and put a 3rd run on the board. AMAZING! Finally, a hit with a runner in scoring position.

The 8th was a one, two, three inning, but the 9th was some serious excitement. Casper Wells led off the inning with a double. Then, Brendan Ryan grounded out to Konerko at first. That moved Wells over to third base. One out, runner on third, the M's were primed to score their 4th run, right? Well, not exactly. Figgy lined out to the shortstop for the second out and then Dustin Ackley struck out on a foul tip to end the game. See a pattern here at all? FAIL!

Five innings out of the nine the Mariners had runners in scoring position and failed to score. Four of those innings were with less than two outs. That has to be the worst game I have EVER seen. That is worse, in my opinion than us giving up that 7 run lead the other day. Pitchers can have rough outings and lose games, this just happens to be every hitter in our lineup failing to make smart outs, failing to hit the ball out of the infield, staying out of a double play. It's preposterous, it's ugly and it's downright pitiful. If this keeps happening, Safeco Field will have the worst attendance that it has ever had this year. Where is the accountability? Ever since Wedge said that we were going to get better in these situations we keep getting into them and FAILING!

What makes me even more sick to my stomach is the fact that our horrible offense today would have got a win yesterday for Felix. I think our loss today was by far worse in the fact that we made so many opportunities and failed to score, yesterday we just plain didn't make opportunity. Sorry Felix! Maybe we'll get this sorted out soon. Maybe when Mike Carp comes back. Maybe Smoak will start to be the hitter he is supposed to be, maybe Montero will too. In the meantime, I feel like we would have more fun going to Tacoma and watching the Rainiers. Cheaper tickets, cheaper parking, more action from the home team. Why not? Oh Mariners, why do you do this to us fans?

Written By: Joe Henrickson at 2:29 AM