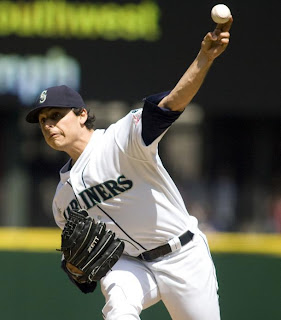 Vargas Gets The "W" With 7 Complete Innings

Today's game was nothing like the pitching matchup that we saw yesterday. Jason Vargas was solid through seven innings today, only allowing 4 hits while walking 3 and striking out 7. Overall, by the numbers, Vargas has been our most solid pitcher thus far with just one bad outing. By one bad outing, I mean allowing 4 earned runs against the Rangers, which isn't that bad, all things considered. His other 3 starts he has only allowed 4 runs combined. Viva La Vargas!

The game started off with a bang as Chone Figgins led off the bottom of the first with a homerun. His 8th leadoff homerun of his career and that came on the 8th pitch of the at bat. Every single pitch thrown to Figgy by Derek Lowe was a sinker and Chone made him pay for the last one. Two batters later, Ichiro Suzuki helped himself to some outfield bleachers as well and hit a solo shot into right center field for his first of the year. Power that I didn't anticipate seeing when the M's posted their lineup today. Before the inning was done, Kyle Seager laced a double into right field and Michael Saunders walked but no other runs were scored.

In the 2nd inning Lowe ran into more trouble as Brendan Ryan singled with one out and Dustin Ackley singled with two outs. You would have thought that the M's would have hit themselves out of the inning but Lowe didn't give them the opportunity as he walked Ichiro and Jesus Montero to score Ryan from third and give Montero his 6th RBI of the year.

The Indians got their lone run in the 3rd inning as Aaron Cunningham hit a ball off the very top of the wall in left field. It literally went off the yellow line and the umpires had to review the play. It was called a double and Cunningham would end up coming in to score after a sac bunt and a sac fly. Mariners 3, Tribe 1.

In the bottom of the 4th Brendan Ryan led off the inning with a walk and was followed by a Chone Figgins single and a Dustin Ackley RBI single to make the score 4 - 1. That would be all that the Mariners would need in the game as Vargas, Tom Wilhelmsen and Brandon League finished out the game and the M's won by that 4 - 1 score.

Once again, there was a despicable inning in which the Mariners had runners at first and third and only one out, just like last night's ninth inning, and once again we did not get a run home. This time it was Munenori Kawasaki that botched a great opportunity. After a Cleveland pitching change, he ended up popping up to the shortstop for the second out. Ryan followed with a groundout to shortstop and the inning was over without a run scored. That was the 5th inning. So, there are some things we need to work on in that area and hopefully that changes soon.

The Mariners got 8 hits tonight and continue to show some good hitting and I believe their offense is getting better and better. As the season continues, I believe that our team will show that we're a team that isn't going to go away quietly and that we are going to be ready to compete in the coming year. There are still some major question marks ahead with Mike Carp and Franklin Gutierrez coming back from injuries. Many believe that Alex Liddi or Kawasaki would be sent to AAA, but I would have to assume that Hisashi Iwakuma could be in that mix as well, considering we are two weeks into the season and we still haven't seen the guy pitch. That, and he had a horrible showing in Spring Training. We'll find out soon enough with the return of Mike Carp.

In some Mariner bad news, Adam Moore has hit the DL once again. This time he has a torn medical meniscus that will require surgery. That means he will be out for a minimum of 4 weeks, but most likely it will be longer than that. With the off-season additions of John Jaso and Jesus Montero, I would think that this would be the last straw for Adam Moore. I really think he has a lot of upside, but I can't see the M's putting a lot of stock in a kid that is so fragile.

The M's refuse to go under that .500 mark and have looked better at the plate than they did all last season. Figgins had a good day once again as I was beginning to think that his latest hot streak was just a fluke and Ichiro hit his first homer as the number three hitter. Maybe this team is going to respond in the way Eric Wedge has planned? If so, we're in for an exciting year.