Are Changes Coming For Ichiro? 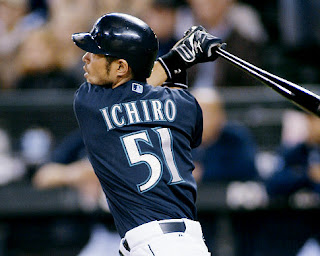 Ichiro Receives A Rare Day Off
For the first time this season, Ichiro Suzuki is being give the day off by manager Eric Wedge. He has played in all 51 games to date and has been the topic of major conversation as of late.

There has been speculation that Ichiro could be moved from the number 3 spot in the order because his numbers are not indicative of a three hole hitter. Currently Ichiro is hitting .271, which sadly leads the team. The concerning part for us as fans is that his slugging percentage is a mere .367. Today, Kyle Seager will be moved into the number 3 spot in the order in lieu of Ichiro's absence. Seager has shown quite a bit more power so far this year and a good ability to drive the ball into the gaps.

Could this day off be an opportunity for Wedge to make a move? In his last couple of interviews with the media he has beenasked about Ichiro being moved and both times has said that anything is possible. In his last press conference it seemed as though the chances were pretty high that this move would be made.

The not so exciting part of this day off is the fact that Chone Figgins will be taking over in right field for the day. With all of our outfield options I have a hard time sending out Figgins. We've walked that road, we've been there, let's move on. If Casper Wells were here, I would love to see him in right, but it's only one game.

We'll have to wait and see how this all unfolds, but I believe that change is imminent and Ichiro will not enter the lineup at the number three spot in the order. Now that there will be a break in the action, this is when we will start to see the carousel of lineups be looked at once again. For Ichiro, I can only imagine that he'll land at either number one or number two and my guess is that he'll take over his former spot as the lead-off hitter. Calling my shot! Let's see if I'm right.