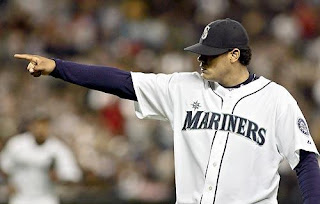 Felix struck out 9 hitters
It started out rocky tonight as the Mariners offense continued it's woes in the first 4 innings. Three of those innings the Mariners hit into rally killers. Mike Carp, Ichiro Suzuki and Kyle Seager all hit into double plays.

It looked like it was going to be another one of those sad days where Felix Hernandez pitches stinking amazing and the rest of the team puts up as many zeroes as he does. To the end of 5 and a half innings, that was the case. Felix was dominating the Twins, allowing just one hit through the first 5 and escaping a bases loaded jam in the 4th. He hadn't barely been touched.

In the sixth, the Mariners went to work. Dustin Ackley hit a leadoff single into the triangle between the pitcher, first and second. The pitcher, Jason Marquis made a play on the ball but nobody was left at first base except for Ackley. Brendan Ryan did his job and moved Ackley into scoring position with a sac bunt back to the pitcher and Ichiro followed with a walk to put runners at 1st and 2nd. Jesus Montero grounded out to the pitcher and both runners moved up 90 feet but now there were 2 outs. I was already irritated at the fact that we hadn't scored a run after having a run in scoring position and only one out. Then there was Kyle Seager. Seager came up to the plate and smashed a shot up the middle scoring Ackley as Ichiro cruised around and scored standing up and Seager went into second base on the throw. A two out, two RBI single for Kyle Seager.

Felix came out in the top of the 7th and struck out two of the three hitters he faced and shut down the side in order. The Mariners came out quickly and went right back to work on offense. Marquis was done for the night and new pitcher Anthony Swarzak came in to pitch the bottom of the 7th. Mike Carp led off the inning with a walk, followed by a Michael Saunders single. Casper Wells replaced Carp at 2nd and Dustin Ackley walked to load the bases. Brendan Ryan did something that not many Mariners have done in the next at bat, he hit a sac fly to score Wells from 3rd. M's were now up 3 - 0.

Matt Maloney replaced Anthony Swarzak at pitcher and Ichiro came up to the plate. With only one out and an 0 - 1 count on Ichiro, he golfed a line drive into right center field into the gap and ended up on 3rd base with a triple, scoring both Saunders and Ackley. Now the Mariners were up 5 - 0. Another pitching change, Jeff Gray replaced Maloney to face Jesus Montero. Montero popped out to first base for the second out and Ichiro was still stranded at 3rd with 2 outs. The second inning in a row where Montero left runners stranded. Luckily, once again, Kyle Seager picked up the slack. He didn't just pick up Ichiro from 3rd, he hit a bomb over the right field wall for a 2 run shot and his third and fourth RBI of the game and the M's quickly had a 7 to nothing lead. Kyle Seager has been the only constant on the team and with his production as of late, I doubt he'll be out of the lineup any time soon.

Felix continued in the 8th inning by striking out 2 of the 3 batters he faced for a total of 9 K's in the game. He didn't give up another hit as he handed the ball over to Steve Delabar in the 9th. Felix pitched 8 complete and gave up just one hit, walked two and that was it. Felix was King tonight!

This is the Mariner team that I believe we should be seeing this year. This is the team that Jack Z and Eric Wedge have talked about. Doubles to the gaps, driving in runs, smart base running and winning ballgames. Maybe it's the demotion of Chone Figgins that has sparked this team. Maybe it's Justin Smoak moving out of the heart of the order. Maybe it's Mike Carp coming back to the team from the DL. Any way you look at it, you have to love it when the M's put up big numbers. It's just one game against a struggling Twins team, but this very well could be the beginning of something new. I always hope every day.