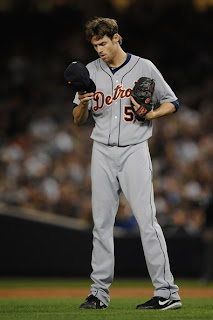 Fister Reminds Seattle That He Can Pitch
It hasn't been a long time since Doug Fister left the Seattle Mariners in a trade to the Detroit Tigers, and it surely hasn't been forgotten. Fister was traded to the Motor City for Casper Wells, Francisco Martinez who is now with the Jackson Generals AA team, Charlie Furbush and Chance Ruffin. Seattle also sent David Pauley to Detroit as well in that deal. We got a stockpile of pitchers and a future power hitting 3rd base prospect, but when Fister comes to Safeco and pitches like he did tonight, I still miss seeing him in a Mariner uniform.

Fister threw 7 complete innings allowing no runs and giving up just 4 hits. This was Fister's first start back off of the DL so it wasn't a surprise that he came out after 7 with only 73 pitches thrown, but not the way you want to leave a game. Fister could have taken the M's to the cleaners tonight, but instead he had to leave the game to his bullpen to try and preserve the shutout and the win.

Phil Coke did his part in the 8th setting the M's down in order, but the ninth inning was up to Octavio Dotel. I didn't think that there could be a worse outing than Tom Wilhelmsen's outing versus the Twins the other night, but I think Dotel's takes the cake tonight. He started out by walking both Brendan Ryan and Ichiro Suzuki to lead off the inning. Then, with Jesus Montero at the plate, he throws a wild pitch and both runners advanced. Next, he throws another pitch in the dirt, but this one was charged to Alex Avila as a passed ball. I beg to differ. Brendan Ryan came in to score and Ichiro moved over to third. Montero ended up getting a pitch that he could hit and he smashed it all the way into the centerfield wall. Not over it, but right into the wall about halfway up and he wound up on second base with a double.

Insert small ball here. Kyle Seager came to the plate and instead of trying to be the hero, he played it smart and he played it safe and he laid down a sacrifice bunt that moved Montero over to third base with just one out. That's something that we haven't seen a lot of this year, but it was done right tonight. John Jaso came to the plate and finished off Dotel and the Tigers with a sac fly to right field. There was almost a play at the plate, but pinch runner Munenori Kawasaki slid in and avoided a tag by Avila that may have been a little late anyway.

All in all, it was a poor offensive game against a terrific pitcher. The great part about this game is that we were handed an opportunity and we took advantage of it and capitalized on it. We haven't been producing at all in situations where other teams are giving away base runners, but tonight was our night and the M's pulled a win out of their hats. Their win streak is now at 3 games and tomorrow we get to see Justin Verlander for the first time this year. We've had plenty of success off of him in the past, hopefully this year is no different. In Verlander's 5 losses last year, one of them were against the Mariners. We will be throwing Kevin Millwood on the hill tomorrow. Go Mariners, let's make it 4 in a row.

SodoJoe
Written By: Joe Henrickson at 2:02 AM