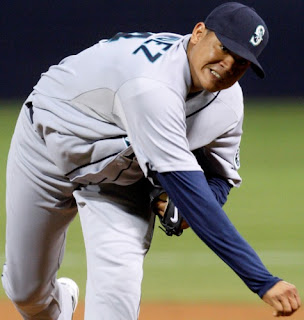 Felix Gets Touched Up In Bronx
It wasn't the best of days for Felix Hernandez. Pitching with a one run lead from a Dustin Ackley lead off homerun, the Yankees came back in the bottom of the first and scored one for themselves. Felix allowed the 2 hits in the first inning and never really found his groove.

Felix allowed a hit in the second inning and three straight singles in the fourth. If it weren't for a great throw from Mike Carp to nail Alex Rodriguez at the plate, the M's would have been down 2 - 1.

In the fifth, the M's had the bases loaded and only one out for Brendan Ryan. Ryan came up and struck out and handed it over to Ichiro to ground out and end the inning. The M's are now back to not scoring the easy runs and the Yankeed escaped the jam.

It was the 6th inning that really got me going. Jesus Montero, former Yankee came to the plate with the score tied 1 - 1 and he jacked an opposite field solo shot off of starter Hiroki Kuroda. It was Montero's 5th homerun of the year and it was a nice added touch to rub into the Yankees face as we took the lead 2 - 1.

That lead wouldn't last long. Felix came out with the lead and immediately began to struggle. First, allowing a walk to Alex Rodriguez, then a single to Robinson Cano who went 4 for 4 on the night. With runners on 1st and 3rd and two outs, Raul Ibanez came to the plate. Ex-Mariner, Raul Ibanez. If it wasn't enough that he even signed to play for the Yankees, today took the cake. Ibanez roped a 3 run shot to right field to give the Yankees a 4 - 2 lead and that would be enough to win the game. Later, Andruw Jones hit a 2 run shot off of reliever Steve Delabar to make the score 6 - 2. Delabar was brought in to face Jones who was pinch hitting, obviously that didn't work out as planned.

This one didn't go Felix's way and it didn't go the M's way, but I still love the fact that Montero hit one out in his first game back to Yankee Stadium as Michael Pineda sits on the DL.

The Mariners still have a lot to sort out. Our bullpen needs help, our offense is still pretty dismal and we don't really have any way to fix those things. We can just hope and pray that some of these guys catch fire and start to hit like professionals. Here is hoping for the best. We'll see you tomorrow as former Yankee Hector Noesi takes the hill. Wish him luck!

SodoJoe
Written By: Joe Henrickson at 2:17 AM