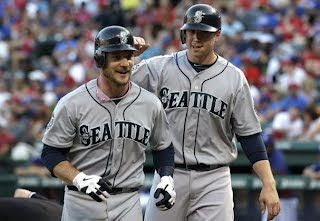 Jaso went 2 for 5 with 3 RBI
Today was a day unlike most others. Jason Vargas took the mound against Scott Feldman who has yet to claim a win on the season. Usually in these types of circumstances Feldman would wind up throwing a career best game and the M's would strikeout about 12 times. Not today!

Today the Mariners ran into their usual bad luck. Hitting into double plays on line drives to the outfield. Really, how many diving grabs does Nelson Cruz come up with? He came up with a nice one today off the bat of Jesus Montero and doubled up Dustin Ackley at 2nd base. With their bad luck, came some good luck as well. The M's were recipients of a rare Adrian Beltre error with the bases loaded that allowed them to score 2 runs in the 5th inning. They also capitalized on an Elvis Andrus error in the 8th inning and rode that to a 6 run inning.

Aside from luck, the M's did something today that we haven't seen a whole lot of this year. With runners on base, they actually hit the ball. Starting with John Jaso in the second inning who hit a 2 run shot to center field that scored Justin Smoak. It was Jaso's 2nd homer of the year. That put the M's up 2 - 1 until the 5th inning error by Beltre made it 4 - 1.

In the 6th inning, Josh Hamilton decided it was time to hit another homerun. This one to deep center field for his 21st of the season. It seems to be too easy for Hamilton as he gained his 2nd and 3rd RBI of the day.

With the score 4 - 3, the Mariners went to work in the 8th. Kyle Seager hit a leadoff double, his second of the day and then Justin Smoak singled and Seager went to 3rd. John Jaso singled to score Seager and Smoak went to 2nd. Michael Saunders singled to load the bases off of new pitcher Mike Adams who replaced Alexi Ogando. Brendan Ryan hit a slow roller to Andrus at short and he bobbled the ball and everybody moved up 90 feet. Ackley singled and the carousel kept on turning and the M's scored again. Mike Carp followed suit and that proved to be it for Adams, insert Mark Lowe. Ichiro Suzuki greeted Lowe with a sac fly that brought in another run and would be the innings first out. Jesus Montero grounded out and advanced the runners to 2nd and 3rd. Kyle Seager came up for the second time in the inning and Mark Lowe threw a pitch in the dirt to Seager that scored Ackley from 3rd. Seager would end the 6 run inning by flying out to Nelson Cruz.

This is the type of baseball that the M's need to be playing. Not just today, but everyday. It can happen, it should happen and hopefully it will happen. Despite the absolute gifts of at least 3 runs off of errors, we really came up big tonight with runners in scoring position. My fear is that our barrage of hitting today will be the only hitting we do for the entire week. When we've had games like this in the past we seem to empty the tank in one game and have nothing left to offer for a few games. Let's hope that's not the case.

Today could be the day that we turn the corner offensively. Seriously, it could be. Then, in a few short games, our team will enter the confines of Safeco Field again and forget all of the glorious hits. All of their runs will be but a distant memory and they'll be waiting for another road trip. I hope I'm wrong, one day we'll see them hit at Safeco. The only one that said it wasn't hard to hit at Safeco was Casper Wells, and he hasn't got much of a shot this year. Today was a great game for our offense, a great game for Jason Vargas and a great game for John Jaso.

Until next time Mariner fans!

SodoJoe
Written By: Joe Henrickson at 2:28 AM