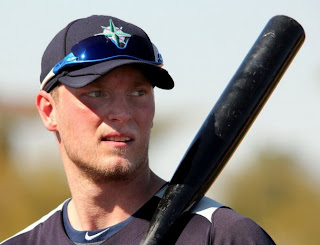 Saunders hits lead off double in 8th
The Mariners went into the bottom of the 8th inning with the score tied 1 - 1. Michael Saunders led off the inning pinch hitting for Casper Wells and hit a double to left and put the M's in position to get the win. Chone Figgins laid down a sac bunt to move Saunders over to third base and put the M's chances in the hands of John Jaso.

Jaso started the game as the lead off hitter for the M's as Dustin Ackley had the day off. So, he wasn't pinch hitting, but for some reason, in situations when he needs to come through in the clutch, he's been clutch. Today was no different as Jaso hit a single into left center to score Saunders with what would end up being the winning run. Jaso tried to stretch his single into a double but was tagged out sliding into the bag.

Brandon League came in to pitch the ninth inning and quickly looked as though he was going to pitch himself into a jam as he walked Austin Jackson to lead off the inning. Luckily for League and the Mariners, Brennan Boesch grounded into a double play to erase the threat and Miguel Cabrera flew out to Saunders in center field to end the game.

One thing I noticed after today's game, the team was excited. More than your average, "We won a game" type of excitement though. This was more like a family, a team that was excited to be playing together and a team that was having fun playing baseball again. Hopefully this atmosphere will continue.