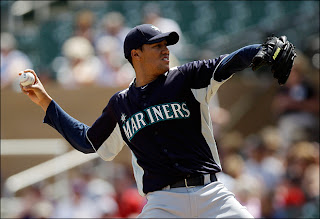 Noesi pitches 7 strong innings
Hector Noesi looked better than ever today against the Minnesota Twins. He went 7 complete innings, giving up just 4 hits and one run. Ryan Doumit had two of those hits and a solo homerun. Doumit also hit a solo shot off of Tom Wilhelmsen in the 9th inning. That didn't prove to be enough for the Twins.

The Mariners started off early on offense, grabbing a 3 run lead after just the first inning. Dustin Ackley got things going with a lead off walk and Brendan Ryan came up big with a single to put runners at 1st and 2nd with no outs. Ichiro was put out on a ground ball and Jesus Montero came to the plate. Montero ripped a ball down the third base line for a double as both Ackley and Ryan scored. M's were up 2 - 0 and Montero picked up his 14th and 15th RBI of the season. Kyle Seager followed up Montero's double with a shot to the right field wall that scored Montero. Seager was held to a very long single as the ball hopped up in the air off the fence into the hand of right fielder Erik Komatsu. That was Seager's 17th RBI and he is now tied with Ichiro in the team lead for AVG. at .298.

Mike Carp led off the 2nd inning with a solo shot, his first of the year. A deep drive to right field that there was no doubt about. Starter Nick Blackburn was in trouble early as the M's now had the lead 4 - 0 and didn't let up. In the third inning the M's loaded the bases with only one out and Justin Smoak came to the plate. What was anticipated as being a breakout inning ended up being a forgotten inning as Smoak popped out to the 2nd baseman and Mike Carp grounded out to shortstop to end the inning.

The Justin Smoak era is getting a tad bit tiring, he went 1 - 4 today, but simply isn't getting anything done at the plate when needed. Another amazing opportunity for him to blow a game wide open and it didn't get done. There have been many opportunities for our rising star of a first baseman and he simply hasn't got it done. Smoak is batting .180 on the year and has a .241 OBP. Looking at his amazing numbers that he had in AAA ball, I don't think it would hurt to send him down for a spell and have him regain his confidence. Have Alex Liddi cover first base for a bit and let's see what happens. Like I said, it can't hurt.

The game went into the 4th inning and the Mariners tacked on one more run as Dustin Ackley led off with a triple. Smashing a ball into the left center gap that looked like a stand up double and I think that center fielder Denard Span assumed Ackley was holding at 2nd base, but, once Span got the ball, Ackley turned it into high gear and took off for 3rd base and slid in well ahead of the play. It was a heads up play by Ackley and put him in position to score on a Brendan Ryan sac fly. M's were up 5 - 0.

Final score of the game was 5 - 2 after a couple of homers by Ryan Doumit but that was all the M's would allow. It was great to see Noesi have a good outing and gain a little bit more confidence. It was great to see Carp get his first HR out of the way and it was incredible to see Kyle Seager continue to rake. The M's took 2 of 3 from Minnesota and now face a Detroit Tigers team that will be coming to Safeco looking for revenge after the Mariners swept them in a series in Detroit last road trip.

It seems as though things may be falling into place for this team, I don't want to be premature though. I had similar thoughts when we played Detroit, but then we fell apart and lost 7 straight. Hopefully we can keep this train going and see the entire team respond to some great offense this past week. It's going to be a long, emotional year as a Mariners fan, but then again, when is it not? Get out to the games and support your team.