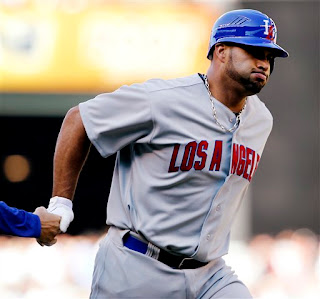 Albert Can Hit At Safeco!
Albert Pujols has hit a homerun in each of the past three games versus the Mariners. A struggling Albert Pujols has found his way back to being the Albert we all know and he's done it here at Safeco Field. If anyone can be a hitter at Safeco Field, it's Albert. Today's homer coming off none other than Felix Hernandez who faced him for the first time today. In the first match-up of the day, Felix struck him out on three pitches. The second, the homerun and the third at bat, Albert hit the first pitch fastball for a double.

Mariners fought back and gained the lead in the bottom of the fifth on RBI singles by Mike Carp and Dustin Ackley, but the Angels wouldn't quit. In the top of the 6th they got the bases loaded on three singles, two of them infield singles and Felix was in trouble. After getting Kole Calhoun to strikeout, Angels Manager, Mike Scioscia called for pinch hitter Alberto Callaspo. On a second pitch fastball, Callaspo got all of a pitch that was left out over the plate and hit a grand slam. 5 runs for the Angles on two huge homeruns and the Mariners were out of the game.

Justin Smoak tried to bring them back into it, but the one run off of his solo homer was all the M's would manage for the remainder of the game. It was Smoak's 7th homerun and he is tied with Pujols believe it or not.

That is 3 straight losses for the M's and every time we think that things are going to start getting good, we run into a series like this. Where nothing seems to go right and we lose games that we shouldn't lose, we play lousier than we should play and fall further back in the standings. The M's are now 7 games under .500 and even worse, 9 games back in the standings.

There was some good news today. Brandon League was demoted from the closer role for the time being. As I was writing a post about his horrible performance last night, Wedge was with the media discussing the closer role and stating that there will be no closer and that Wedge is going to rather play the match-ups as he would before the ninth inning. So, not all is lost, but we have to start winning again. Maybe it will be Hector Noesi that comes in and stops the bleeding. At some point you would think this team would really start to gel. Maybe Albert Pujols can give some hitting lessons while he's here at Safeco. We could sure use them.

SodoJoe
Written By: Joe Henrickson at 2:00 AM