Erasmo Ramirez Is Outstanding, As Mariners Blow It, Again! 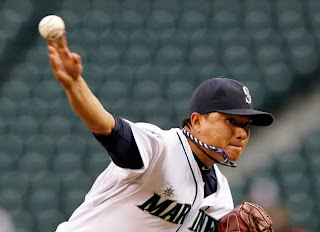 Ramirez Was On His Game Tonight!
Erasmo Ramirez made his 3rd Major League start of his career tonight, and after giving up too many runs in his first couple of outings, he needed to make his mark tonight against the Oakland A's. Tonight, he did just that, he made his mark, he shined bright and he was resilient through 8 innings and was able to pick up his first MLB.... oh wait, this just in.... the Mariners lost 1 - 0 because of a lack of run production.

I was at the game tonight and I could feel it in the air that the Mariners were not going to pull this game off. Erasmo Ramirez made one mistake, leaving a pitch out over the plate to Seth Smith with one out in the 2nd inning that he belted over the center field wall for a homerun. That would be it, no more mistakes as the A's collected only 3 hits and 1 walk in the game. Two of those base runners were erased on double play balls. Erasmo was mowing down Athletics all night long as he finished with a career high 10 strikeouts. AMAZING!

The Mariners got 7 hits tonight, hit into two double plays themselves and almost hit into two in one inning if there wasn't an errant throw on one of them. If there's a team that can hit into 2 double plays in an inning, I bet the Mariners could do it. Every hit was a single and the closest the M's got to a run was in the 1st when Franklin Gutierrez singled with one out, Kyle Seager struck out and Jesus Montero singled to move Guti over to 3rd. Justin Smoak hit a weak grounder to first to end the inning and what would be the M's only chance to score a run. From that point forward, no other Mariner even advanced to second base besides the 4th inning when we almost hit into two DP's.

It's bad Mariner fans. When you look around the league and you see guys like Mike Trout hitting .338 and Mark Trumbo hitting .316 with 17 homers. Buster Posey hitting .295 and Bryce Harper hitting .280 with 7 homers, 4 triples and 11 doubles in just 51 games, it kind of makes it tough to listen to the excuses of having a young team day in and day out.

Eric Wedge expects us to continue to believe that this is somehow going to grow to be a competitive team, when all we are seeing to date is a team that continues to get worse. There is a reason that the players mentioned above are being successful at their young ages. It's because their not expected to carry the team on their shoulders. Eric Wedge has thrown Jesus Montero into the number 4 spot in the lineup because he wants him to be there in the long run. Does anyone remember the trial run of Justin Smoak at the number 4 spot? Smoak tanked and was moved back to the end of the order. Within weeks he was back at number 5 and he's still not getting it done. At all.

Veterans need to be carrying the weight, and, our veterans are not doing that. I understand that Wedge is only playing the hand that he has been dealt, but many other teams are making moves and trying different things in hopes that they may pan out. Jamie Moyer signed with the Blue Jays today, making that his 3rd team this season. We need to help these guys grow, not make them grow. I feel like we just bought a 4 year old some size 34 X 32 jeans and told him to go outside and play and we're all standing around wondering why he can't run very fast. Bring in Vladimir Guerrero and see what he brings. If it's nothing at all, cut him. We have to surround these guys with players that we know can hit or at least put someone in the middle to take some of the weight off.

Today was ridiculous. If I were a pitcher for the Mariners I would be calling a team meeting and telling everybody that I'm sick and tired of pitching my heart out and pitching good enough for a win in any organization and still coming up short. I know these pitchers act as though it's just part of the game, but it has to get to them. It has to be irritating.

I won't promise that we're going to grow up. I won't promise that the team that we are watching today will get any better. It's going to take a radical change from where we are today to change the entire mindset of this team. We need a new mindset, and that starts at the top and trickles it's way down. Wedge has been preaching to us as fans that we're going to be a winning ball club, but I'm starting to wonder what message the players are getting. Something is drastically wrong with this team and that usually means that there needs to be drastic change.