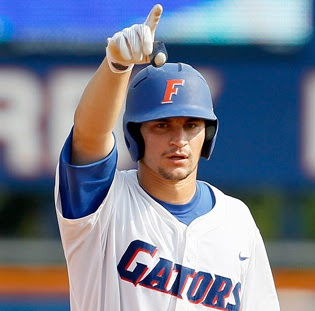 Zunino Drafted #3 Overall By The Mariners
As you probably already heard, the Mariners selected #3 overall in the MLB First Year Player Draft and selected Mike Zunino, a catcher from the University of Florida. Zunino was the Southeastern Conference Player of The Year in 2011 in his Sophomore year. A standout at the catcher position, many believe Zunino to be the most well rounded ball player in college ball and compare him to the likes of Jason Varitek and Buster Posey.

In the moments that this news came out, that the Mariners drafted a catcher, many were questioning the pick. "Why would the M's draft a catcher when we just traded away Michael Pineda to get Jesus Montero?" That answer is simple. We drafted based on the best talent available, not on a need we have in our current roster. A lot of people seem to have a hard time swallowing this, but in all reality, we never know how anything will pan out. We don't know that in two years Montero will even be catching for this team. We don't know what kind of deals are going to go down, and even if we knew we would have Zunino and Montero, that would be an awesome problem to have. Catchers don't catch every single day and currently we have 3 catchers sharing a spot in the order and Wedge is managing that quite well.

Director of amateur scouting Tom McNamara and GM Jack Zduriencik talked about their choice in the draft and their thoughts on Zunino.


The thing that I ask, more than why we drafted a catcher, is whether or not Zunino will ever make it to the big leagues as a Mariner.

Out of all of these picks, many of them never made it to the Major Leagues and many more never made it as a Mariner. Especially as of late. Most of our first round picks have been traded off for other players. So, in a couple of years we can see how Zunino has panned out for our club. Either he is with the team, catching a majority of the games or he will be off somewhere else and we can debate what value we received for him. Hopefully we won't be overlooking our draft choices and looking at another Tito Nanni situation.

Best of luck to Mike Zunini. As Jack Z has been doing a lot better with getting his draft picks through the ranks than Bill Bavasi ever did, I look forward to seeing how he progresses and even more, I look forward to the day when I will be writing about his Mariner debut.

Written By: Joe Henrickson at 1:00 AM