From Theory To Fact: The Mariners Cannot Hit At Home - Swept By Padres 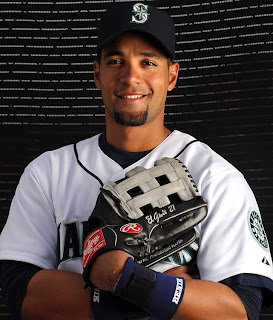 Guti Made The Most Of His First Day Back
It took the Mariners until the 7th inning to finally get a run on the board after being shut out for a consecutive 15 innings by the Padres pitching staff. This time it was Edinson Volquez who put the Mariners on ice through the first 6 frames.

The Mariners made it easy on him too, scratching out just two hits, one in the 2nd and one in the 6th. In the 7th, a one out walk to Franklin Gutierrez got things going for the M's. After a strikeout by shortstop Munenori Kawasaki looked to be the nail in the coffin, Ichiro Suzuki and Dustin Ackley hit back to back singles and scored Guti. The Mariners were on the board with the Ackley RBI but it was a day late and a dollar short as they were already behind 6 - 0 before the inning began.

Erasmo Ramirez started for the Mariners. His first start in the Major Leagues and he was cruising right along until the 5th inning. Through 4 he had only given up 2 hits, but the Padres caught onto something, somehow Ramirez may have started tipping his pitches or just hitting way too much of the plate. After the first go around, hitters just knew what to do. Chris Denorfia, Jesus Guzman and John Baker hit 3 consecutive singles to start off the 5th before Alexi Amarista hit a line drive that Kawasaki made a fabulous leaping catch for to save a couple runs for the moment. The next batter, Will Venable hit a single to score a run and keep the bases loaded. With one out and only one run in it looked as though the Mariners were going to get out of the jam, but, on a grounder to Kyle Seager, he threw to Ackley at 2nd who then turned and fired to Justin Smoak. The ball hit a few feet before first base and Smoak couldn't come up with the ball. So what should have been a 5-4-3 double play ended up being a 2 run miscue. One of those runs were still charged to Ramirez due to the fact that there was an out on the play and therefore Ackley was only charged an error for the advancement of runners after the first 90 feet. After that, Ramirez ended up getting out of the inning.

Then it got worse. For some reason, Eric Wedge thought it would be a good idea to send Ramirez back out to the mound after the shelling the inning before. As one would expect, it was the same results. Ramirez gave up 2 singles and followed by giving up an RBI double to Chris Denorfia. Finally Wedge came to his senses and pulled Ramirez for Hisashi Iwakuma. He faced one batter, giving up an RBI single and he was done. On came Charlie Furbush. Furbush started off by picking Jesus Guzman off of 1st base and then gave up an RBI single to John Baker to make the score 6 to 0 in favor of the Pads.

One of the biggest knocks I hear about Wedge is that he leaves pitchers in the game for too long. That's what happened tonight. Ramirez was clearly done after the 5th and San Diego was teeing off on him, but for some strange reason Wedge had to send him back out there again. Maybe it's some sort of initiation or something, but I would have rather won at least one of these games.

San Diego had the worst record in baseball coming into this series. They had only won 6 games on the road all season before coming to Safeco Field. I was worried that we would tee off on the Padres and it would spoil my theory about not being able to hit at home, but the Padres made it more fact than theory as they held the Mariners to just 6 runs in the series and all of those 6 runs came in the 7th inning or later.

Does this make us the worst team in baseball?

By percentage points there are 4 teams with a worse record than the Mariners. In the American League there is only one. The Minnesota Twins. I would bet that within the week the Twins have a better record than us. The Cubs, Rockies and the Padres are all further back in the NL as Colorado has an 8 game losing streak and the Cubs have lost 10 of their last 13 games. San Diego had lost 15 of 19 before coming into Seattle to face the M's.

The Mariners have lost 5 of their 6 games on the home stand. This is after winning 5 of 9 on the road versus the likes of the Rangers, White Sox and Angels. We had scored a total of 64 runs in 9 games, including a 21 to 8 spanking of the Rangers. So far this home stand, in 6 games, we have scored just 12 runs. That's an average of 2 runs per game at home. Our 9 game road trip we averaged 7.11 runs per game. Quite a difference right? We scored only 1 run before the 4th inning in all those games and just 5 of those runs came before the 7th inning.

Wedge doesn't want to even hear about Safeco Field being the issue, but if he continues to push the players and they continue to under perform, they end up going elsewhere and being stars. Mike Morse is a perfect example, he couldn't hit here, went elsewhere and now he's a hitter. How about Brian LaHair? He seems to be doing great now. Should I bring up Casey Kotchman? We all know about Adrian Beltre. The list goes on and on. Pretty soon we're going to see an All-Star roster featuring the likes of Dustin Ackley, Justin Smoak, Michael Saunders and Kyle Seager. The problem is, they will all be playing for different teams as we go through the roulette wheel of up and comers to find out that they weren't what we thought they would be either.

Jesus Montero is more than what we see now. Smoak, is definitely more than what we see now and his frustrations this past series were evident. Ackley, he should be way better than what we see now. The Mariners are the only team facing this issue with every single one of it's prospects. If we don't figure it out soon, nobody will ever want to sign with Seattle. Not a free agent, nor a draft pick. Maybe we're already there with free agents, so let's not make things any worse than they already are. Make a decision to move in the fences or change how we play the game.

The Mariners added a run in the 8th inning on a RBI single by Gutierrez. His first RBI in a long time. Starting in center tonight as Saunders moved to left, he may be ready to roll out the rest of the season. Good luck to him, I hope he stays healthy.

Written By: Joe Henrickson at 3:11 AM