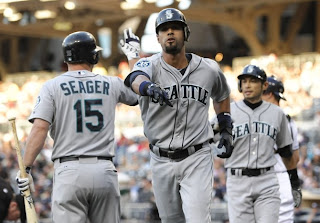 Guti Comes On Strong In Return
This past couple of days we have seen a myriad of runs cross the plate. To Seattle fans, it's a welcomed sight to see the offense produce again. The problem, however, is that Arizona and San Diego have both put up larger numbers that the Mariners in the last couple of games. The Arizona Diamondbacks put a total of 30 runs on the board in our short 3 game stint with them and took 2 of the 3 road games. Now, facing the Padres, they have taken game one by a 9 to 5 margin.

Nobody would have anticipated this a year ago. The Mariners are hitting quite well, putting up their own sets of crooked numbers on the board, but it's their pitching that has been catastrophic as of late. Felix Hernandez has been roughed up a ton this year as his record stands at 4 and 5 with a 3.52 ERA, he hasn't won a game since May 21st. Jason Vargas hasn't won a game since June 4th, Kevin Millwood last won on May 23rd and Hector Noesi, well, you would have to travel all the way back to May 6th to find his last win. Blake Beavan is no longer with the squad, but between Erasmo Ramirez who took his spot in the rotation and Beavan himself, they have not won a game since May 30th. With all that being said, the Mariners haven't won a game from their starting pitchers since June 4th. That's two and a half weeks ago!

The good part about bad pitching is that we get to see some fresh blood every now and then. Ramirez hasn't been great since coming up and actually looks worse than where he was before being sent down, but he has plenty of room to get things worked out I'm sure. Our 2011 first round draft pick, Danny Hultzen has been promoted to AAA Tacoma this week and could be making his MLB debut before too long. In fact, I know he will make his MLB debut before seasons end.

With the bats, the Mariners have come up big as of late. It's a new cast of characters every week it seems, but lately it's been the fresh blood of Casper Wells and Franklin Gutierrez who have joined the team recently. Wells was just recalled from AAA and has torn the cover off the ball, hitting .458 with 6 RBI and a homer since rejoining the team. Guti, he's been hitting .308 with two homers and 8 RBI. Tonight versus the Padres he went 4 for 5 with 2 RBI. Guys that were swinging a hot bat have cooled off and others have stepped up. Looking ahead, shortstop Nick Franklin was just promoted to AAA Tacoma along with Hultzen and it wouldn't be impossible to see him up here at the end of the year either.

Needless to say, the M's have a long way to go to be competitive in this league again. We're still missing a productive bat and everyone in the lineup needs to raise their averages by about 40 points. Seriously! Other than that, I think it's safe to say that we have a weapon being bred in our farm system that is going to make a pretty dynamic pitching rotation really soon and I for one am excited for that day.

We still need a bigger bat. Once again on the radar is the talk of trading our ace, Felix Hernandez. Will the Mariners finally bite and make the move? Would you?

Written By: Joe Henrickson at 2:19 AM