Mariners Beat The Angels and Win The Series 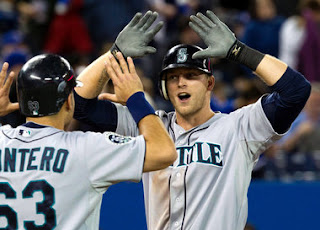 Saunders has been on a tear as of late
Yesterday was a dismal day offensively as the Mariners collected just 5 hits collectively. Michael Saunders had three of them, including a homerun. That would be the only offense the Mariners would have as they were defeated 6 - 1 by the Angels. Today, I suspected that the Mariners would have been searching for another "L" as manager Eric Wedge decided to hand the ball to Hector Noesi on just 3 days rest.

Felix Hernandez was supposed to be today's starter, but dealing with a sore back this week he is being held back until at least Sunday. Noesi had a short outing last time out when Chicago earned 6 runs off him in just 4.1 innings. He only threw 68 pitches in the game before being pulled and that factored in to him being able to go today.

Today was almost a mirror image of his last outing as Noesi managed to go only 4.0 innings against the Angels. He was taken out in the 5th inning after walking the first two hitters that would eventually end up scoring. The M's at that time were down 6 - 4.

Mike Carp got the scoring going in the top of the 2nd with a 2 RBI double that scored both Saunders and Jesus Montero. That lead was short lived as Noesi gave up a double to Erick Aybar that scored a run and then another on a sac fly by Hank Conger. The score was tied at 2. The bottom of the 3rd, Kendrys Morales launched a two run homer that put the Angels up 4 - 2.

The M's fought back to a tie game in the top of the 5th when Kyle Seager hit a double off the wall in right center that scored both Ichiro and Dustin Ackley. Ackley was aboard via a ground rule double that put Ichiro on third. The Angels scored two more in the bottom of the inning, both charged to Noesi as he exited after the two walks and Shawn Kelley came in to relieve him. After Kelley got Albert Pujols to pop out, Morales hit an RBI single. Mark Trumbo struck out swinging and Howie Kendrick hit an RBI single and the Halos were back on top.

Then the game got really exciting. This has been the case in many of the games lately. This team is starting to get to be a lot of fun. Definitely fun to watch. With two outs in the top of the 6th the Mariners mounted a rally. With two men on, Ichiro hit a single into left on a line drive that brought Saunders in to score and send Angels starter Jerome Williams to the showers. Dustin Ackley was up to face new pitcher Bobby Cassevah and was granted a free pass to load the bases and that brought Seager to the plate. Seager grabbed two more RBI by hitting a single up the middle scoring Mike Carp and Ichiro and the Mariners were up by a run 7 - 6.

The M's were in trouble in the bottom of the 6th when the Halos had two runners on and one out. Stephen Pryor replaced Shawn Kelley on the mound and put an end to the threat in a hurry. With just one pitch, Pryor induced an inning ending double play on a ground ball to Justin Smoak from Maicer Izturis. It was more of the same in the bottom of the 7th when the Angels had Pujols on 3rd with one out. Mark Trumbo was intentionally walked and Pryor faced Howie Kendrick. Again, Pryor was able to get the double play to end the inning and strand Pujols over at third base.

The top of the 8th inning, Ichiro hit his 3rd homer of the week and supplied some much needed insurance as the Mariners went up 8 - 6. Brandon League came in and got a 1,2,3 inning in the 8th and "The Bartender", Tom Wilhelmsen came in to get the save in the 9th, allowing a two out double to Pujols and then striking out Morales to end the game.

That puts the Mariners at a 5 and 4 road trip against some of the most difficult teams in the business. They are now 26 - 33, just 7 games under .500 but still 8 games back behind the division leading Texas Rangers. If we keep playing baseball like we are now, we've got a chance to stay in this thing. I may be crazy to say that, but we're at least being exciting enough to want to watch. Last year at this time we were still in it. It had nothing to do with our offense and had everything to do with our pitching. This year, it's the opposite. Our pitching has really suffered and our hitting has too, but it keeps getting better and better. If our offense is truly finding their way, I can see this team making it interesting all the way to the end. Texas is having it's share of troubles and the Angles, although getting hot now, have had their share of troubles too.

There are a ton of variables that we could throw out there when we get into our pitchers of the future that will be up before we know it, but if they are anything like we anticipate, we got a good thing going here. I haven't been the most patient fan, but I'm becoming a believer. A believer in the process that Wedge has been preaching. I hate the way he goes about things, but it's all starting to come together. Let's just keep winning, series by series. Let's go MARINERS!!!

SodoJoe
Written By: Joe Henrickson at 12:56 AM